Even though there are various concerns, the fans are eagerly waiting for the tournament to take place. 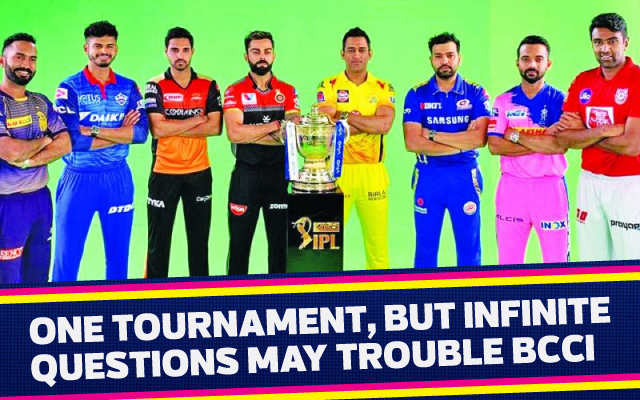 The Indian Premier League 2020 which was supposed to start on 29th March had been indefinitely postponed due to the onset of COVID19. With the situation not improving in India, the BCCI are most likely to shift it abroad. While Sri Lanka and UAE have come up as top contenders, let’s look at how it would be if the IPL actually takes place.

Sourav Ganguly had revealed that the BCCI is looking at the September to November window to conduct the cash-rich league. However, there are a lot of factors to be considered while talking about the league becoming a reality. Which country will host the league? When will it take place? Will the players agree to travel? Will it be possible to make arrangements for so many people? Let’s try to look at these questions one by one.

Too many questions – Where and how?

While UAE seems like the top contender to host the league, there has been no official announcement yet. UAE had hosted a part of the IPL in 2014 and it had been a great success. Keeping this in mind it’s not a shocker that they are expected to do the same this time around as well. The only difference is that they may get the host the entire season this time around.

There are many things to consider while looking at when the IPL could take place. The player schedules, the logistics and the precautionary measures would have to be considered. If sources are to be believed the tentative window is from 26th September to 7th November.

One of the biggest questions would be that even if the IPL is conducted how many players would actually be willing to play. West Indies, England, and Pakistan are the three teams that announced squads for the resumption of international cricket. Various cricketers from the West Indies and Pakistan chose not to be a part of these series.

What if top players decide not to turn up?

In a tournament like the IPL where players from all around the world come in contact with each other, it would definitely be a tricky choice for the players. Though there would be an added financial incentive as well as the IPL provides huge money to the players.

However, we need to cover all outcomes and therefore let’s now talk about what happens if the players decide against participating in the IPL. With squad sizes ranging from 21-25, the franchises could easily be found lacking the required options. It would be interesting to see what the teams do if key players choose to back out. Imagine RR without Ben Stokes or KKR without Andre Russell.

The next big question is that would it be possible to make arrangements for so many people. While it has been hard to plan International tours involving only two teams, the IPL is a grand affair involving as many as eight teams. The number of people involved in the complete functioning of the tournament is beyond imagination. Will the circumstances permit such arrangements? Well, it would be a question the BCCI would definitely have to answer.

A big concern for the BCCI – Players health and safety

While these are just some of the concerns, a lot of other things would have to be worked out as well. What happens if mid-season a player is detected with corona? Can they quarantine and test so many people at that time? Are they willing to risk the safety of so many members? Only time will tell what finally happens.

Even though there are various concerns, the fans are eagerly waiting for the tournament to take place. It would be a perfect platform for Indian cricket to resume as well. Not only the fans, but the franchises are also awaiting an official announcement. Let’s not forget the financial importance the IPL holds.

One positive is that the board members have repeatedly stated that they will try their best to make sure that the league does take place. If the IPL does take place it would definitely be a moment to rejoice for cricketing fans all around the globe. The tournament is not only about India but it generates high interest from people all around the world.