The legendary cricketer MS Dhoni will become the first man in the history of the IPL to feature in an astounding 200 matches in the cash-rich T20 league. 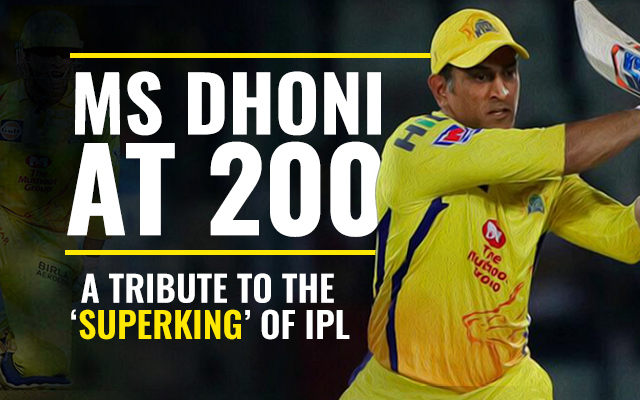 He has been the fulcrum of his side since the provenance of the Indian Premier League(IPL). His spine-tingling final over finishes, his expeditious stumpings behind the wicket, and his suave moves as the skipper have allowed the Chennai Super Kings (CSK) to emerge as one of the most successful franchises in the IPL.

Mahendra Singh Dhoni has carved a niche for himself as one of the greatest icons in IPL cricket. And, when he walks onto the field on 19th October 2020, Dhoni would have traversed a peak that no man has trodden. The legendary cricketer will become the first man in the history of the IPL to feature in an astounding 200 matches in the cash-rich T20 league.

MS Dhoni – A leader at a pedestal of his own

As a captain, Dhoni sits at a pedestal of his own. In the table below, let us have a look at the Top 10 players with the most matches as captain in the IPL. 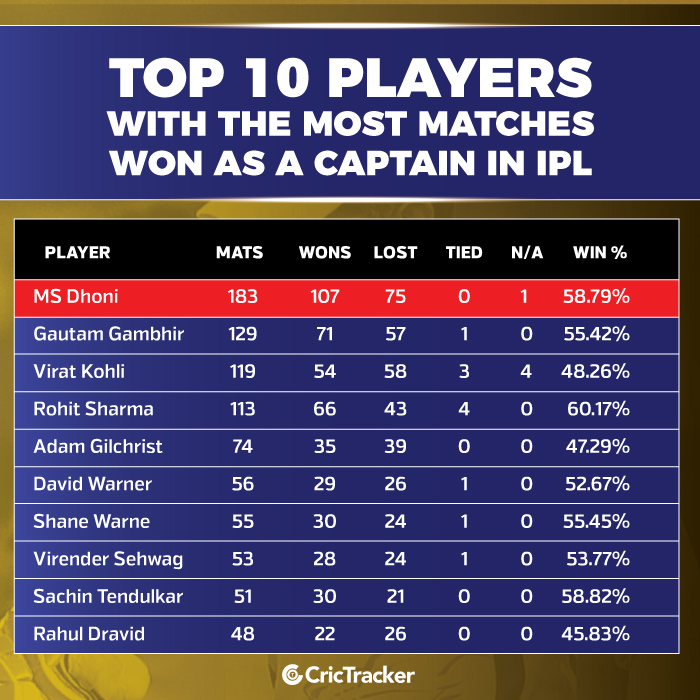 One look at the table is enough for us to understand that Dhoni is surely the greatest IPL captain ever. He is the only skipper to have led an IPL side to more than 100 wins. In fact, the second-placed Gautam Gambhir is 36 wins behind Dhoni, a difference that speaks volumes about Dhoni’s longevity as a leader.

Yes, it might be argued that Rohit Sharma and Sachin Tendulkar have a better win percentage than Dhoni. But, the fact that Dhoni has led a side for more than 180 times tilts the scale in his favor. In fact, Dhoni has led the Chennai Super Kings(CSK) side to the playoffs in each and every edition of the IPL.

And, with such glittering numbers as a captain, Dhoni will easily qualify as the greatest IPL skipper.

Also, as far as IPL cricket is concerned, Dhoni is a behemoth and will qualify as one of the greatest IPL batsmen of all time. In the table below, let us take a look at the Top 10 highest run scorers in IPL cricket. 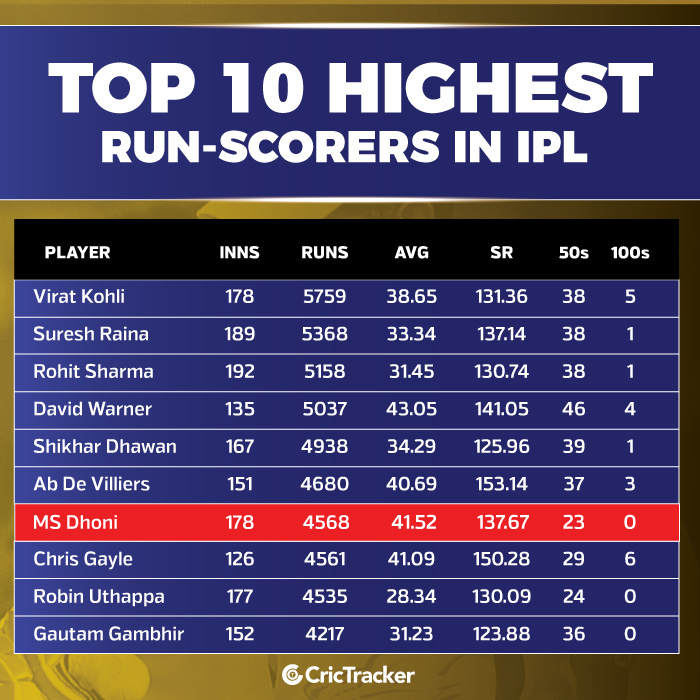 From the table, we can find that Dhoni’s dazzling numbers make for impressive reading. He has the second-highest average in the list of top 10 highest run-scorers in IPL history and has scored his runs at a stunning strike rate of 137.67. Also, Dhoni is the second middle-order batsman to have aggregated over 4500 IPL runs as well.

A myriad of memories to savor

Think of a run chase and Dhoni together, and the first image that comes to mind are the mountains of Dharamshala. In the year 2010, exactly a decade back, Dhoni played one of the most important knocks of his sparkling career. The mountains made for ethereal viewing, and when the CSK skipper strode out briskly, the yellow brigade needed 104 runs off 62 balls.

The master chaser did what he always does best. He took the game deep, and the equation boiled down to 16 runs needed off the last over. And, the next 4 deliveries bowled by Irfan Pathan are now etched in IPL folklore as Dhoni launched a savage assault on the bowler, and took his side home. It was a victory that was snatched from the jaws of defeat, a chase that reaffirmed the fact that there were very few men in the game who could match Dhoni in a run chase.

Fast forward eight years to 2018. Chennai were taking on the Bangalore side at the Chinnaswamy stadium. When the skipper arrived in the middle, CSK needed 132 runs off the last 11 overs. Again, Dhoni played the central role, acted as the catalyst, launched a savage assault on the bowlers and took his side to an improbable victory. Dhoni scored a belligerent 70* off 34 balls, at a pace of more than 2 runs a ball, as Chennai romped home with 5 wickets to spare.

Dhoni has made a career out of doing the impossible for his side and has given a myriad of memories to savor for his fans with the willow. And, these are memories that will remain for posterity.

MS Dhoni- The Super king of the IPL

Having had such a sparkling career, Dhoni deserves to be called the ‘Super King’ of the IPL. He has accomplished everything there is to achieve in the league and has left an indelible mark in the league as a skipper and also with the willow in hand.

But then, in the 2020 season, CSK have their backs against the wall. His team is now languishing at the 7th place and needs a miracle from here on to qualify for the playoffs.

Can Dhoni inspire Chennai to the playoffs stage this time around and script another fairytale?

Well, having seen the man do seemingly impossible things for more than a decade, we can never write off Dhoni, can we?

Note: All stats have been taken from Cricinfo and iplt20.com and have been updated as of 18th October 2020