Temba Bavuma's Stars are still looking for their maiden victory in the tournament.

The Jozi Stars, the defending champions of the Mzansi Super League (MSL) have had a horrid time thus far. The team, led by Temba Bavuma, has lost all their four matches and are languishing at the bottom of the points table. Their Net Run Rate of -2.543 doesn’t hold them in a great position by any stretch of the imagination. Another loss would make it very tough for them to reach the next round.

Their next match is against the Paarl Rocks in the latter’s backyard. The Rocks are also in a precarious position, having only one victory in their three outings. It’s almost been two weeks since the Rocks won their last game against the Cape Town Blitz. Faf du Plessis and Co were expected to get over the line against the Tshwane Spartans at home and they will be keen to make a comeback.

In the two matches played thus far at the Boland Park, scores in excess of 170 have been registered twice. The track played a lot better in the second game and bowlers have started to find it tough at the venue. After the last match, teams may not take the risk of defending targets. The temperature will be around 23 degrees Celsius. Dew won’t play much of a part at any stage of the encounter.

The Rocks’ batting has pretty much been up to the mark. James Vince struck gold right from the outset with an unbeaten 86. Cameron Delport and Henry Davids haven’t been disappointing. Faf du Plessis hasn’t set the stage on fire just yet, but is capable of taking any bowling attack apart. Adams, Fortuin and Viljoen have been economical. Spinner Tabraiz Shamsi has four wickets to his name.

The Stars have depended heavily on Reeza Hendricks and Temba Bavuma, who have 161 and 160 runs respectively at averages in the 40s. Barring the duo, the rest of the batting, including Van der Dussen and Chris Gayle, has faltered. Their bowling hasn’t been great with most of them going above 8 an over. Simon Harmer has four wickets to his name while Kagiso Rabada has a couple. 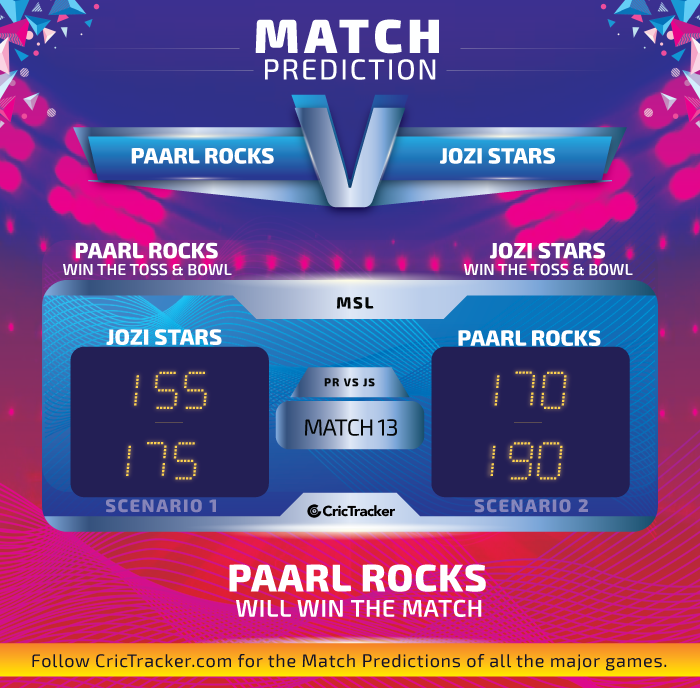