There are chances of heavy rain around 3 to 4 PM and the game may see lot of interruptions.

The Jozi Stars, the defending champions, had every chance of making a winning start to the 2019 edition of the MSL. But after a spirited show in their run-chase against the Cape Town Blitz, Temba Bavuma and Co couldn’t close out the match. They are next scheduled to lock horns with the Nelson Mandela Bay Giants in the second of Sunday’s doubleheader at St George’s Park in Port Elizabeth.

The Bay Giants, on the other hand, failed to qualify beyond the round-robin stage in the previous MSL with only four victories out of 10 matches. On head to head count, both teams lost their home contests against each other in the previous edition of the T20 tournament. The Stars may have the upper hand going into the next game as they are already warmed up with the Giants yet to play.

Last season, four games were played at the venue out of which, three were won by the team, batting first. The margin of defeats for the chasing teams were 48, 81 and 28 runs. Hence, batting first should be the way forward for the sides. There are chances of heavy rain around 3 to 4 PM and the game may see lot of interruptions. The temperature will around the 20 degrees Celsius mark.

The Giants are likely to go with Jason Roy and Ben Dunk as their openers. The left-right duo can unsettle any bowling attack. Marco Marais, skipper Smuts and Heino Kuhn form a powerful middle-order. Morris and Behardien have experience on their side. The hosts will have the option of playing leggie Matthews alongside Tahir. Beuran Hendricks and Dala are expectant starters in the lineup.

The Stars may not make any change right away, though there is a chance of benching Nono Pongolo. Reeza Hendricks, skipper Bavuma and Rassie van der Dussen are in red-hot form. Chris Gayle can wreak havoc with the bat on his day. In the bowling area, Kagiso Rabada will hold the key. Dane Paterson can also crank up the pace. Harmer, Olivier and Christian’s role will be critical as well.

The prediction is for Jozi Stars to win the match. 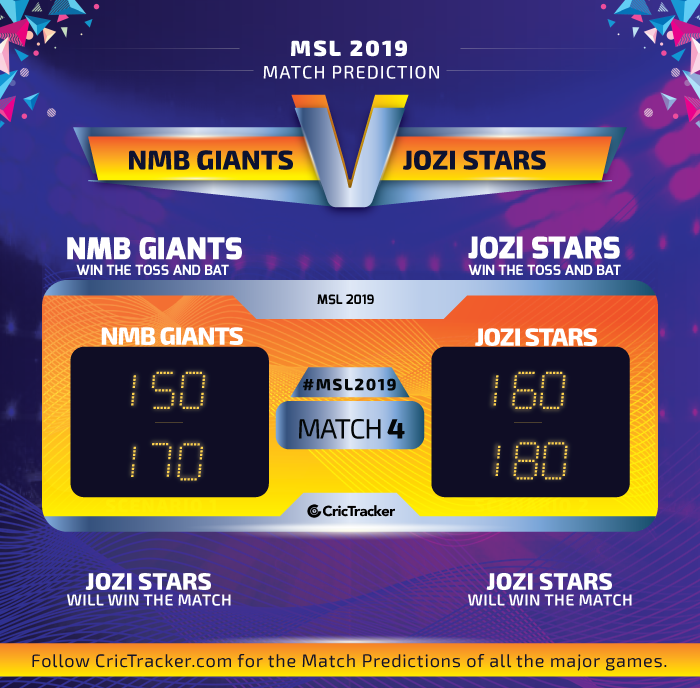