The visitors are coming into this game with four defeats in their previous five ODI fixtures and it is unlikely that they will defeat the Kiwis at home.

Despite getting annihilated in the 2nd Test, Sri Lanka did throw a fight at the hosts and showcased tremendous courage on occasions. Despite winning their most recent ODI fixture, Sri Lankan cricket team’s recent run in the 50-overs format has been quite disastrous and things don’t look very bright going into this game.

The hosts, on the other side, have been outstanding on home soil and despite their mixed run in recent ODI games, they will start as favourites to romp through the Islanders. With most of their players very experienced at this level, will be tough for Sri Lanka to get away with a positive result, but cricket always tends to throw some great surprises.

The first of the three ODIs will be played at the Mount Maunganui on January 3rd (Thursday).

A fair track will be rolled out for this game and weather forecast around the stadium is pretty good for cricket. Considering that a high scoring game might as well be on the cards.

Injury and availability updates after the announcement of squads

The experienced campaigner Ross Taylor has been in terrific form of late, registering two centuries and a fifty in his previous four innings. Another facet to be considered is that all of these knocks have come outside New Zealand and he can only be more lethal on home soil.

Kiwi skipper Kane Williamson is always a big presence and is one of the most consistent sources of runs. He can be trusted blindly for the head-to-head and small leagues, but if you’re looking for something big, the in-form man is Ross Taylor. Thisara Perera and Jimmy Neesham have been pretty good in recent times and can be good picks as the vice-captain. 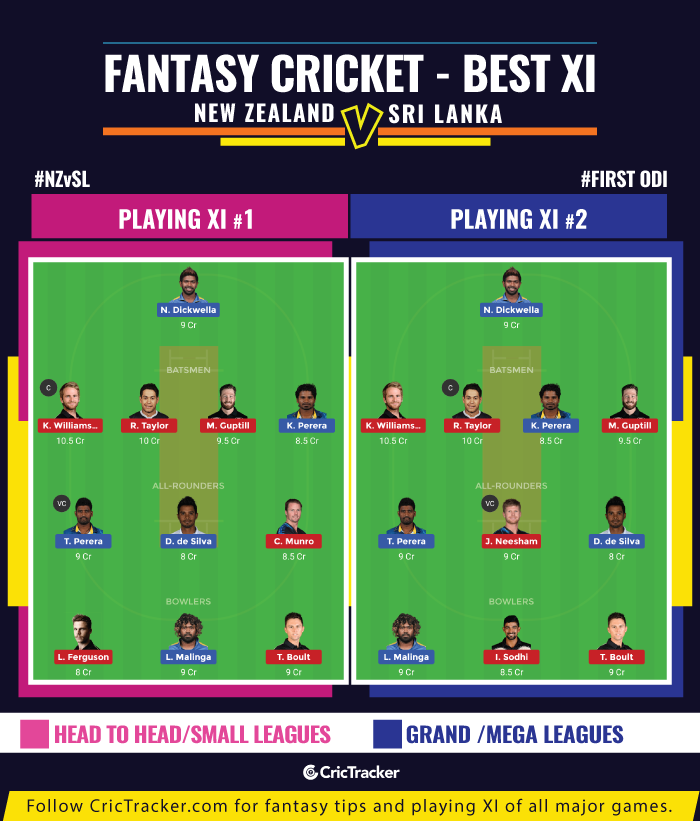 If you wish to take a gamble with the captain or the vice-captain selection, Colin Munro and Trent Boult are your two picks. Both the cricketers can win games on their own and when they’re in good nick make a significant impact on the game.

It is a long shot to expect Sri Lanka to win this as New Zealand are just way too strong at home. They have too much firepower in their line-up and are expected to go 1-0 up in the series.