The 29th match of the National T20 Cup 2020 will be played between Northern and Khyber Pakhtunkhwa at the Rawalpindi Cricket Stadium, Rawalpindi.

The match is scheduled to start at 03:00 PM Local Time (03:30 PM IST) and will be streamed on Pakistan Cricket YouTube Channel.

In the National T20 Cup 2020 in Pakistan, Northern have been the best team clearly by quite a considerable margin. With 7 wins in 9 games, they have already sealed the top spot on the points table. A loss in this game wouldn’t affect their top spot but they would fancy heading into the semi-finals with a win in this match.

In their last league game, Northern will take on Khyber Pakhtunkhwa. The Pakhtunkhwa are second on the points table with 5 wins and are ahead of Sindh only in terms of the NRR. They lost their previous two games but would look forward to winning this one and holding on to that second position on the points table.

NOR vs KHY Weather Report for Match 29:

The temperature will be around 33 degrees Celsius on what will be a sunny day in Rawalpindi. The humidity levels will be in the early 30s.

The pitch in Rawalpindi has been quite good for batting. Chasing teams have been largely unsuccessful here and the team that wins the toss might prefer to bat first.

NOR vs KHY Top Picks for Today’s 11Wickets Fantasy Match:

Zeeshan Malik has featured in 7 games in this tournament and has mustered 268 runs at an average of 38.

Iftikhar Ahmed is batting brilliantly in the National T20 Cup 2020 and is scoring at a strike rate of 160. He mustered 231 runs thus far.

Shaheen Afridi is bowling brilliantly in the tournament and has accounted for 16 wickets in only 8 games thus far.

Haris Rauf has been one of the best bowlers in this tournament. In only 6 games, he picked up 14 wickets.

Sohail Tanvir had a decent tournament with 7 wickets in 8 games. If there is a requirement, he can deliver a few handy runs with the bat too.

Suggested Playing XI No.1 for NOR vs KHY 11Wickets Fantasy Cricket: 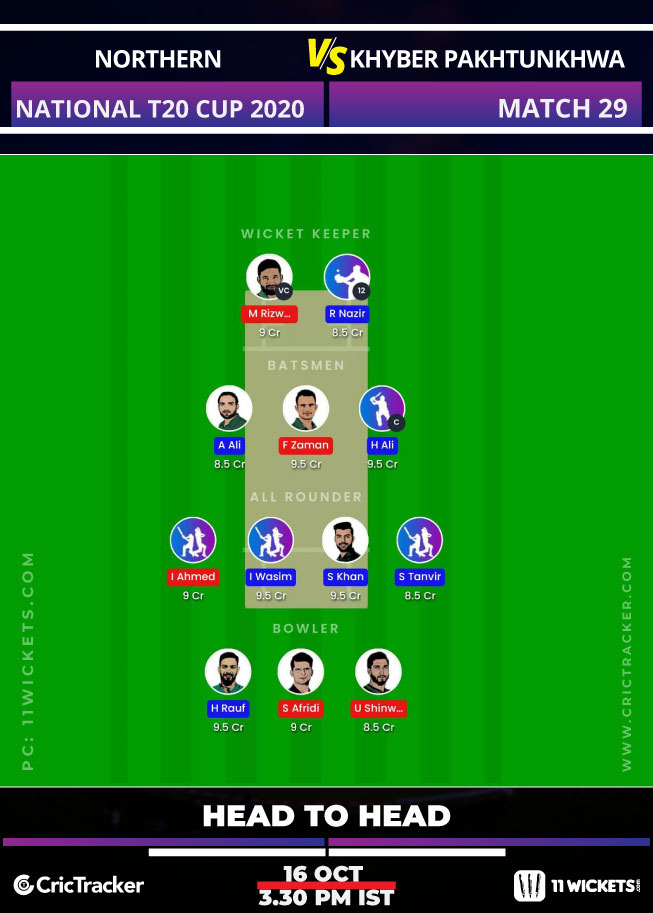 Suggested Playing XI No.2 for NOR vs KHY 11Wickets Fantasy Cricket: 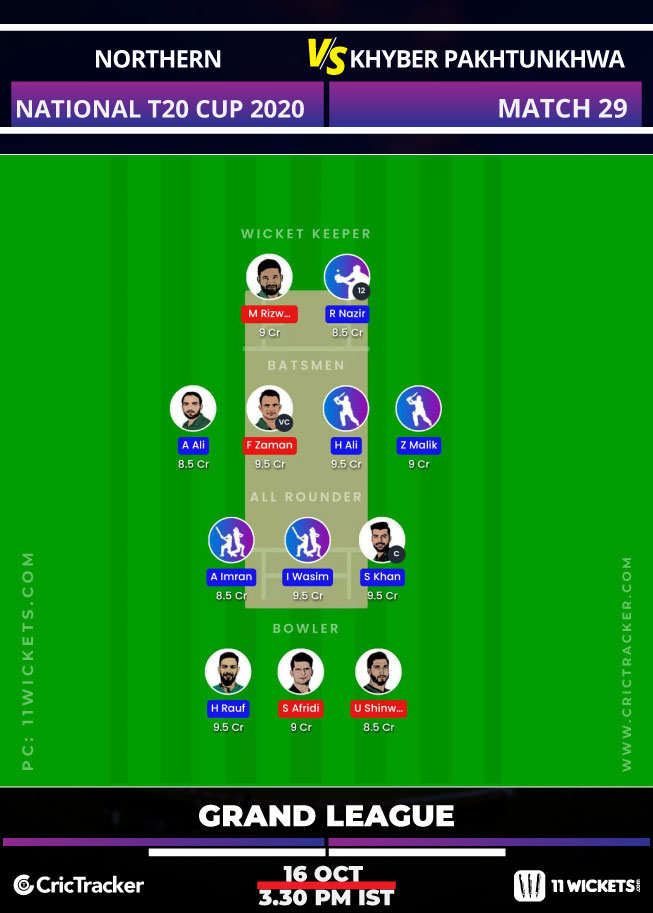 There are some really good options from both the teams. You can go for a few risky choices for your Grand League team.

Today’s NOR vs KHY Probable Winners: