NOS vs MNR Match Prediction – Who will win today’s The Hundred Men match?

Both teams have two wins in five games so far in the Hundred Men's 2022 edition.

Northern Superchargers are all set to take on the Manchester Originals in their next encounter of the Hundred’s Mens 2022 fixture at the Headingly in Leeds. Both teams have won two out of their five games so far and have lost three games so far in their campaign.

This will be an important fixture for both sides to get a move on in the tournament with the business end of the tournament approaching. Northern Superchargers picked up a comfortable victory against Birmingham Pheonix in their previous game and they will be riding high on confidence. On the other hand, the Manchester Originals won their last two games after starting the tournament with three losses in a row.

Two games have been played at the venue so far, and both have gone in the direction of the side batting second. Chasing has been the mantra for the skippers on the pitch, and any scores below 150 might not be enough to defend given the conditions.

Andre Russell pummelled the bowling attack to different parts in the previous game and showed his brute power with a stunning knock. The Caribbean lad hit five fixes and six fours in his 23-ball 64 at a strike rate of 278.26 and helped his side post a big total on the board. He will be looking to unleash his long levers in the upcoming fixture against Northern Superchargers. 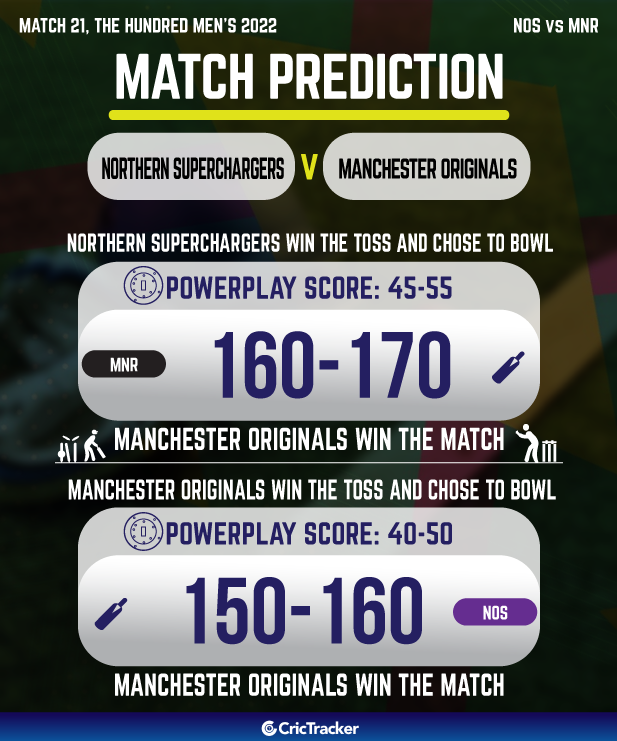