With the series on the line, the 2nd T20I to be played tomorrow at Mount Maunganui promises to be an enthralling encounter.

On Friday, international cricket resumed in New Zealand after eight long months, and the Kiwi fans won’t be complaining after their team’s spectacular show in the rain-curtailed event. From towering sixes to some seething pace bowling; irritating rain interruptions to a pendulum-like swinging momentum, the first game had it all and laid the foundation of a promisingly exciting series.

After opting to bowl first, the New Zealanders would have been kicking themselves for the kind of start the visitors got. The Windies openers came out all guns blazing and ensured that the rain from the sky was not the only rain that Kiwis had to tackle. In no time, the raining boundaries led them to 55 in three overs.

However, in what was a dramatic comeback, the hosts reduced them to 60 for 5 inside the Powerplay! The momentum swung again when Kieron Pollard came out to do what he does the best, and Fabian Allen did well to lend a supporting hand to his skipper. However, some insipid bowling and smart work with the bat led the Kiwis to seal the game by five wickets and take a crucial lead.

With the series on the line, the 2nd T20I to be played tomorrow at Mount Maunganui promises to be an enthralling encounter, with the West Indies needing a win to stay alive in the 3-match series.

The ground dimensions at Bay Oval are more like one expects to see as far as cricket grounds are concerned. Hence, the bowlers can breathe slightly easy. Though only slightly, because the track has often been known for assisting the batsmen, and with plenty of power-hitters on both the sides, nothing would be served on the platter for the bowlers.

Playing combinations for NZ vs WI

The Caribbean hunk has been ridiculous form this year, be it as a batsman or a captain or a fielder. Despite the smoking start they got, it was Pollard’s blitzkrieg knock in the last game that made the encounter a competitive one. Expect him to put on a similar show this time around. Not to forget, his strike rate in all the T20s played since 2019 is 199.87 and averages 55.90.

A five-wicket haul in the T20Is is no mean feat. Lockie Ferguson was the destroyer-in-chief, and it was his incredibly fierce spell that broke the momentum for an otherwise-sailing West Indies. He has come into this series after a decent form in the IPL, and he chose to waste no time in finding his rhythm come international cricket.

NZ vs WI Head to Head

West Indies are expected to win the match and level the series. 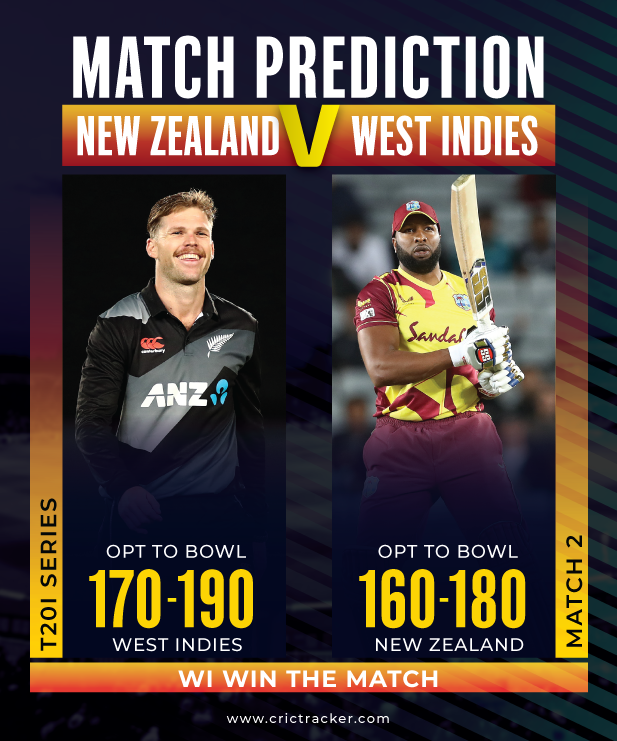