Pakistan vs New Zealand, 3rd ODI, Match Prediction - Who will win the match?

Pakistan vs New Zealand, 3rd ODI, Match Prediction – Who will win the match?

Pakistan and New Zealand will be battling out in the third and the decisive ODI to cling the three-match series. The combat will be played at the Dubai International Cricket Stadium after the first two matches were played in Abu Dhabi. Looking at the way Pakistan staged a comeback in the second game, there isn’t much that differentiates both these team.

The momentum is on the home team’s side after their first win against the top-six ODI teams this year. However, the Blackcaps aren’t to be taken slightingly as they would be seeking revenge for the T20I series loss. The batting of both the teams will be under focus in the decider and no team would want to concede away supremacy. We’ve definitely got a great game on our hands and the players would try hard to pull out some special performances.

The pitch has got something to offer both for the batsmen as well as the bowlers. Expect mediocre scores on this track and anything above 240 or 250 should be a par one for the side batting first. Batting under the lights gets slightly easier here and spinners have found some great success. Clear skies with good winds blowing around are the weather prediction for the game and the temperature will ease down as the night progresses.

The biggest positive for Pakistan is that their opener Imam-ul-Haq is fit to play the third ODI. Hence, they might go in with an unchanged XI. They have got enough fast bowling reserves and some good quality spinners. The part-timers like Shoaib Malik or Mohammad Hafeez can also chip in if the situation demands.

New Zealand should look to brush off the defeat in the previous game and should look to go in with a clean slate into this game. Colin de Grandhomme hasn’t looked great in this series. Although he is expected to make it to the final XI, the management might also ponder over including Todd Astle or Ajaz Patel in his place keeping the conditions in mind.

The prediction is that New Zealand will win what will be a close encounter. 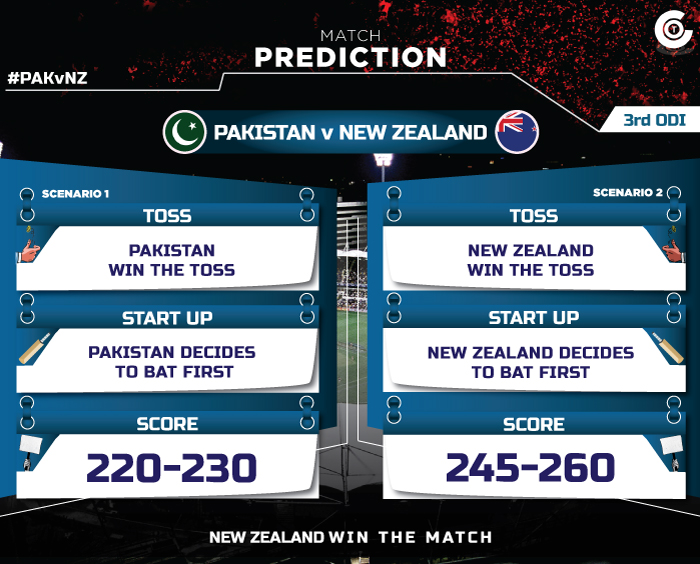