Under the lights, Mohammad Amir could be threatening with the new ball.

The 1st ODI of the three-match series between Pakistan and Sri Lanka will be hosted by the National Stadium in Karachi.

Finally after double security checks and a number of meetings, Sri Lanka tour of Pakistan is set to get underway. The history will be created when the two teams will take the field on Friday as the visiting team will be playing an ODI in Pakistan for the first time since 2015 when Zimbabwe had toured. The Islanders have arrived with a depleted side with 10 of their top players refusing to tour.

But all such news will be set to rest on Friday as the jam-packed crowd will welcome Sri Lanka with a huge roar. No wonder there is a lot of excitement around this series. This is also the first series for the newly appointed Pakistan coach Misbah-ul-Haq and he will be hoping that his boys put up a good effort in the middle.

According to AccuWeather, the weather is set to be clear in Karachi. There will be a few clouds which shouldn’t be a worrying cause for many. Around 7 PM local time, there is a chance of rain with thunderstorms but things should clear up soon. The temperature will hover around 30-35 Degrees Celsius during the match.

With this being just the start of the season, the pitch at the National Stadium should be a good one to bat on. The spinners will definitely come into play later in the evening which means that the team winning the toss will mostly opt to bat first. There is also a forecast of dew coming into play which might change the captains’ mind.

Babar Azam is the best Pakistan batsman at the moment and it is a no-brainer that he is one of the top picks. Apart from him Haris Sohail and Imam-ul-Haq can also make a significant impact. Wahab Riaz can extract reverse swing in the death overs if Pakistan bowls first. Under the lights, Amir could be threatening.

For Sri Lanka, Avishka Fernando will hold the key along with Lahiru Thirimanne. Dasun Shanaka has the ability to punch above his weight with both bat and ball. 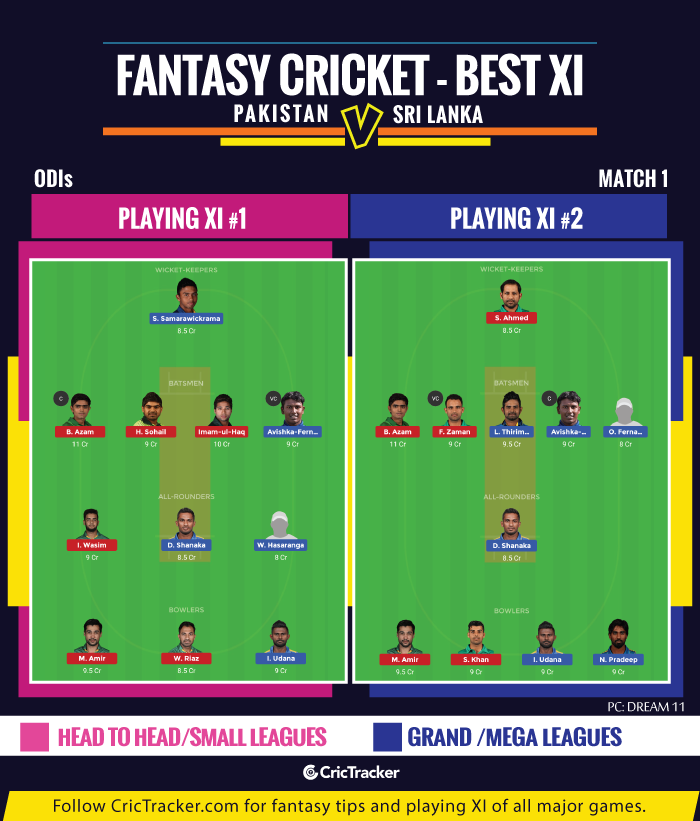 It would be better to ignore Sarfaraz as he might not get to bat much. Samarawickrama is a top-order player and will definitely get a chance to showcase his skills.

Better pick your bowlers after the toss as there is uncertainty around who will play, especially in Sri Lanka’s case.

Pakistan is expected to start the series on a winning note.