Mohammad Hasnain is the leading wicket-taker with nine wickets at an economy of 8.26.

Quetta Gladiators, the defending champions of the PSL, have had a topsy-turvy run this time around. But with three wins from five matches, Sarfaraz Ahmed and Co are in the top-half of the points table. But their confidence may be a tad low after Multan Sultans defeated them by 30 runs in their previous game. The Gladiators will next be up against the Lahore Qalandars at the Gaddafi Stadium.

On head-to-head, the Gladiators have a 5-3 lead over their opponent. The Qalandars, on the other hand, are yet to open their account in the tournament. Two out of the three losses came in Lahore, their home ground, itself. Sohail Akhtar’s men would be hoping to turn their fortunes around going forward in the tournament. The Qalandars last went down to the Peshawar Zalmi and need a win.

Three PSL games have thus far been played in Lahore in 2020 and all three went in favour of the team, batting second. Hence, chasing should be the way forward. The scores also went up with the progression of the matches. The conditions will be a bit hazy with the temperature around the 18 degrees Celsius mark. The humidity will mostly be in the 50s and 60s with dew also playing its part.

Chris Lynn has been striking at 190.47, scoring 80 runs, something positive for the Qalandars. Mohammad Hafeez is their leading run-scorer with 113 runs at an incredible average of 56.50. Fakhar Zaman has 80 runs. Sohail, the Lahore skipper, and the other batsmen, are yet to fire.

In the bowling department, Shaheen Shah Afridi has six wickets at a stupendous economy of 5.72. David Wiese and Dilbar Hussain have a four each in their kitty. Barring them, the rest of the bowling has been poor. Haris Rauf’s form has been a concern as he has leaked runs at an economy of 10.12.

The Gladiators’ batting is in jaw-dropping form. Their openers Jason Roy and Shane Watson have 170 and 139 runs respectively. In the middle-order, Sarfaraz has churned out 135 runs. Azam Khan has emerged as a massive prospect, scoring 126 runs. Even Cutting and Nawaz have been excellent.

The duo has also done their bit with the ball in hand. Mohammad Hasnain is their leading run-scorer with nine wickets. Naseem Shah has also started hitting the right channels after missing the first two matches. Tymal Mills have five wickets in three matches at an impressive economy rate of 7.41.

The prediction is for Quetta Gladiators to win the match. 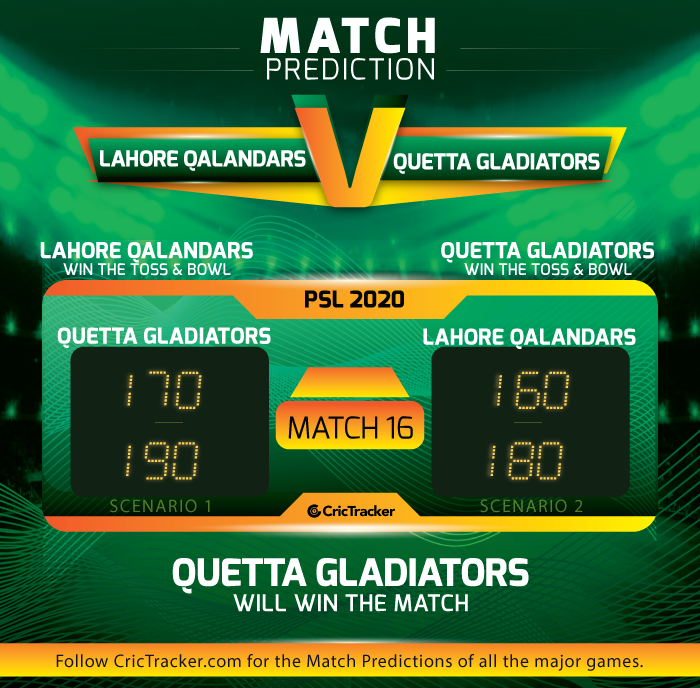