Karachi Kings has many batting stalwarts in their arsenal including the likes of Sharjeel Khan and Babar Azam.

As the PSL 2020 trail has progressed into its business end, Karachi Kings and Lahore Qalandars are set to lock horns in the second semi-final of the tournament. Both the teams– in their pursuit of laying hands on the coveted trophy– will be aiming to deliver in the semi-final.

It has been an enthralling journey so far for Lahore Qalandars as they have paved their way into the semi-finals for the first time in the history of PSL. In their previous game of the tournament, Qalandars registered a thumping nine-wicket victory against table-toppers Multan Sultans on the back of ‘The Chris Lynn’ show. The Australian smoked Sultans’ bowling force and smashed a quick-fire ton to propel his side to the victory. Lynn fired 113 runs off just 55 balls, including 12 fours and eight sixes, to take his team to the semi-finals. Lynn stitched a century partnership along with Fakhar Zaman to oust Sultans.

However, Qalandars will be missing his services along with David Wiesse, who have withdrawn from the PSL 2020– like many foreign players– in the wake of Coronavirus outbreak.

Karachi Kings, on the other hand, have fared well in the league stage of the tournament. After clinching four wins from eight matches, Kings finished on the second spot in the points table with nine points. In their previous game against Quetta Gladiators, the Babar Azam-led side had to suffer a five-wicket defeat.

After amassing 150 runs on the scoreboard, Kings’ bowling force was unable to halt Gladiators’ batsmen as they hunted down the total with 22 deliveries to spare. Kings will be eager to retaliate from the previous loss and oust Qalandars and march their way into the final of the tournament.

The Lahore pitch has been really good for batting this season. In the last five matches here, the team batting first has clicked the 180-run mark on four occasions. There are no chances of rain whatsoever to interrupt the match. The temperature is expected to hover between 13 and 26 degrees Celcius during the course of play with a moderate level of humidity.

Karachi Kings have many batting stalwarts in their arsenal including the likes of Sharjeel Khan and Babar Azam. The duo will be hoping to provide their side with a good start. Khan has amassed 199 runs while Azam has gathered 345 runs so far in the tournament. Along with the Sharjeel-Babar duo, Kings’ middle-order will be bolstered by Iftikhar Ahmed and Cameron Delport.

The experienced duo of Imad Wasim and Mohammad Amir will be at the helm of Karachi’s bowling force along with Umaid Asif.

Qalandars will undoubtedly miss the services of Lynn, who was their talisman in their previous knock. The Australian hogged the headlines by smashing a sublime century against Sultans to steer his side to the semi-finals. Qalandars have named Abid Ali as a replacement for in-form Lynn. Meanwhile, they also have Mohammad Hafeez, Sohail Akhtar and Ben Dunk in their batting armoury.

The trio of Shaheen Afridi, Haris Rauf and Dilbar Hussain will aim to dismantle Kings’ batting force and guide Qalandars to the title glory. Salman Ali Agha has also been added to Qalandars squad ahead of the semi-final. However, the chances of him donning the jersey are slim.

Karachi Kings are expected to win the encounter. 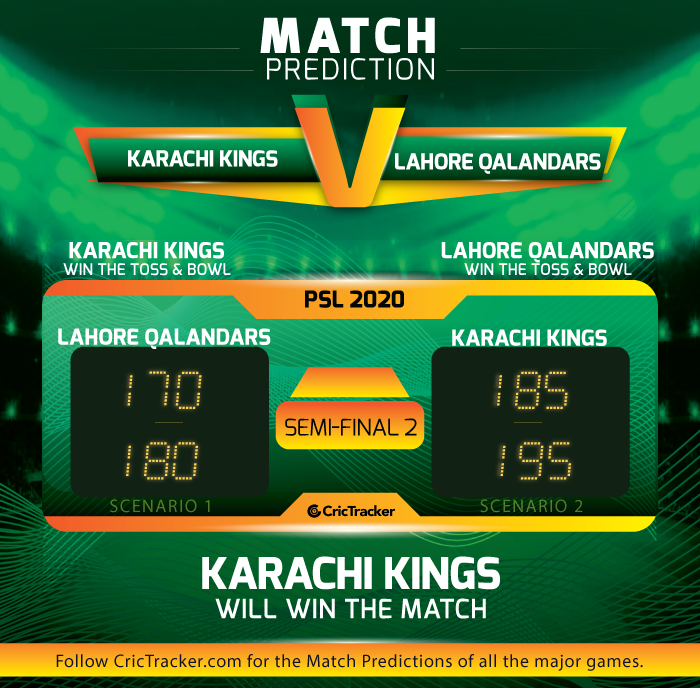