In their previous meeting, the Wahab Riaz-led Zalmi beat the Sultans by six wickets.

Multan Sultans secured their second win in the PSL 2021 after they beat the Imad Wasim-captained Karachi Kings by 12 runs on Thursday, June 10.

But with two wins from six matches and a net run rate of -0.099, Mohammad Rizwan and Co have loads of work to do if they have to qualify for the playoffs. Their next match is against the Peshawar Zalmi in the second on Sunday’s doubleheader in Abu Dhabi.

In their previous meeting, the Wahab Riaz-led Zalmi beat them by six wickets after chasing down 194. Both teams are precariously placed in the points table and need a victory to stay in the hunt.

The pitch in Abu Dhabi has helped both the batters and the bowlers. The spinners have come into the picture and shot-making hasn’t been all that tough for the batsmen.

Since it’s a night match, teams may opt to bat second. The playing conditions will mostly be clear with the temperature around the 34 degrees Celsius mark. The humidity will mostly be in the high 60s.

Playing combination for MUL vs PES

Mohammad Rizwan has slipped to second in the list of leading run-scorers in PSL 2021. In six matches, the right-hander has notched 326 runs at an average and strike rate of 54.33 and 138.72. He also has three half-centuries with the highest score of 76. However, in the last game, he looked a tad scratchy in his 29-run knock. The opener will be looking to get back his rhythm.

Imran Tahir has been a tough nut to crack for the opposition batters. In the two games he has played in PSL 2021, the leg-spinner has gotten four wickets at an economy rate of seven. In the Sultans’ previous game against the Kings, Tahir picked up two wickets and gave away 27 runs in his four overs. It goes without saying that the Zalmi can’t afford to let him settle down. 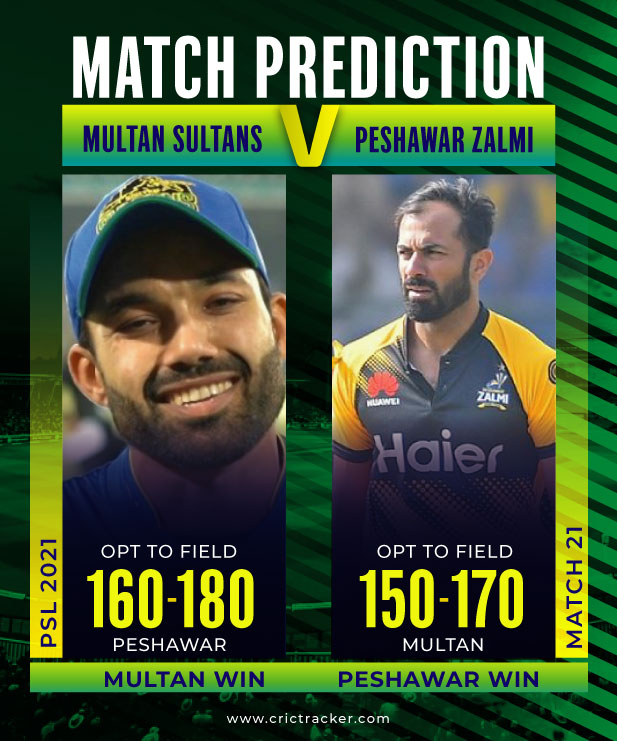