In their previous meeting, the Kings beat the Gladiators by seven wickets.

The Karachi Kings went into their last game in a must-win situation to stay alive in the 2021 Pakistan Super League (PSL). And they beat the Lahore Qalandars by seven runs to stay in contention, though they are placed fifth in the points table.

They need another win in their last game to have any chance of making it to the playoffs. Their next game is against the Quetta Gladiators in the first of Saturday’s doubleheader in Abu Dhabi.

The Gladiators, meanwhile, are already out of the tournament following their humiliating defeat at the hands of Multan Sultans. Sarfaraz Ahmed and his men are only left to play for pride.

The pitch in Abu Dhabi has been a belter for batting of late. The track in the match between Peshawar and Islamabad was a batters’ paradise. But the teams batting second have felt the pressure and hence, batting first should be the way forward. Accurate bowling has also given the pacers and spinners plenty to cheer for.

Playing combination for QUE vs KAR

Babar Azam has, pretty much, been unstoppable in the 2021 edition of the PSL. In nine matches, the youngster has notched 478 runs at an average and strike rate of 79.66 and 137.35 respectively.

With six half-centuries to his name, he has shown tremendous form. In the previous game against the Qalandars, the right-handed batter got three lifelines and went on to score a fifty.

Noor Ahmad didn’t have a great outing against the Peshawar Zalmi. But he made an impressive comeback against the Qalandars. The left-arm wrist-spinner picked up the wickets of Mohammad Hafeez and Ben Dunk at crucial junctures of a game.

In his four overs, he gave away only 19 runs to go with 12 dot balls. The tweaker can cash in on an out-of-form Gladiators’ batting lineup. 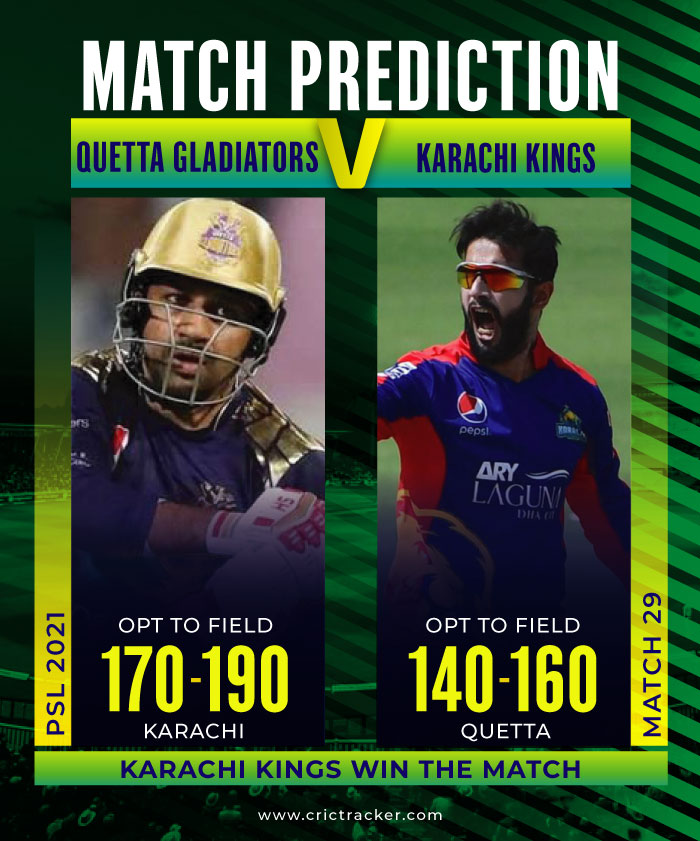