Paul Stirling can be a good pick for captaincy.

The 3rd Place Play-off of the Abu Dhabi T10 League 2021 season will be played between Qalandars and Team Abu Dhabi on 6th February, at the Sheikh Zayed Stadium in Abu Dhabi.

This match will start at 06:45 PM IST (05:15 PM local time). It will be live on Sony Sports Network and live streaming is available on Sony LIV.

Things were going brilliantly for Qalandars, until they met Delhi Bulls in their last group stage game. A defeat in that game placed them in the eliminator, where they lost once again, against Team Abu Dhabi. Abu Dhabi hardly got any chance to celebrate, as they were defeated in their very next game by Northern Warriors.

This has brought us to the third-place qualifier between Qalandars and Team Abu Dhabi. Not that the stakes are as high as it will be in the last game, but both teams will try to finish their season on a high nonetheless. From a neutral’s perspective, this should be an interesting watch.

The weather will be as pleasant as ever before in Abu Dhabi. The temperature will be around 23 °C and chances of rainfall are nil.

Unlike the first few days, the pitch is not completely a deathbed for the bowlers anymore. That being said, batsmen will still rule the roost here.

Paul Stirling has been in brilliant form with the bat for the last couple of matches. He has scored 183 runs at a strike rate of over 220.

Jamie Overton is currently the highest wicket-taker of the tournament. He has scalped 11 wickets and has an economy rate of under 13 runs per over in eight matches he played.

Sohail Akhtar has been in an exemplary run of form with the willow. He has scored 231 runs at an outstanding average of 77.

Chris Jordan has been the most consistent bowler for the Qalandars. He has scalped 7 wickets and has an economy rate of under 8.5 runs per over.

For Team Abu Dhabi, Joe Clarke is a crucial asset in the batting department. He has scored 177 runs at a phenomenal strike rate of nearly 200. 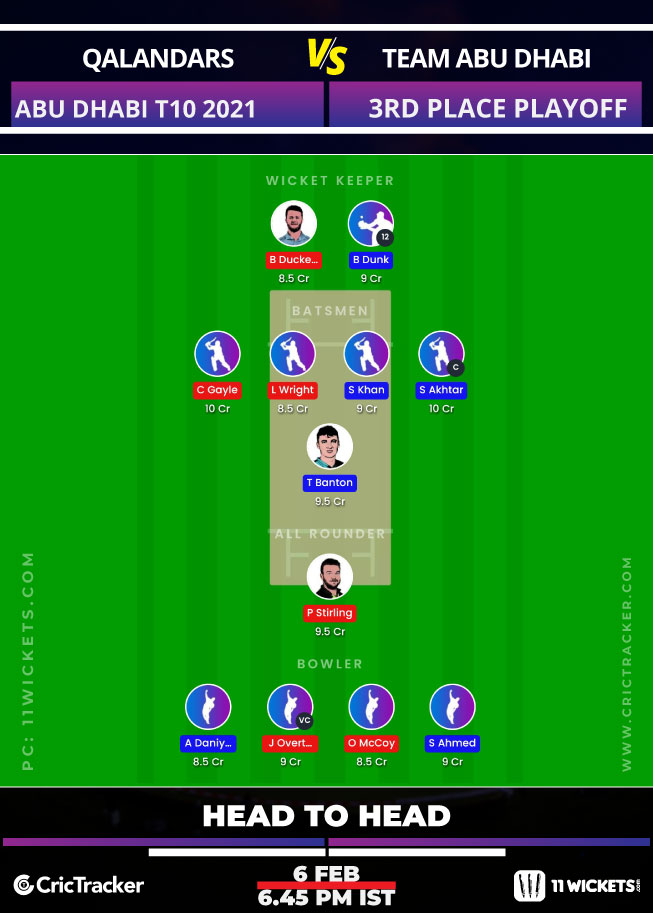 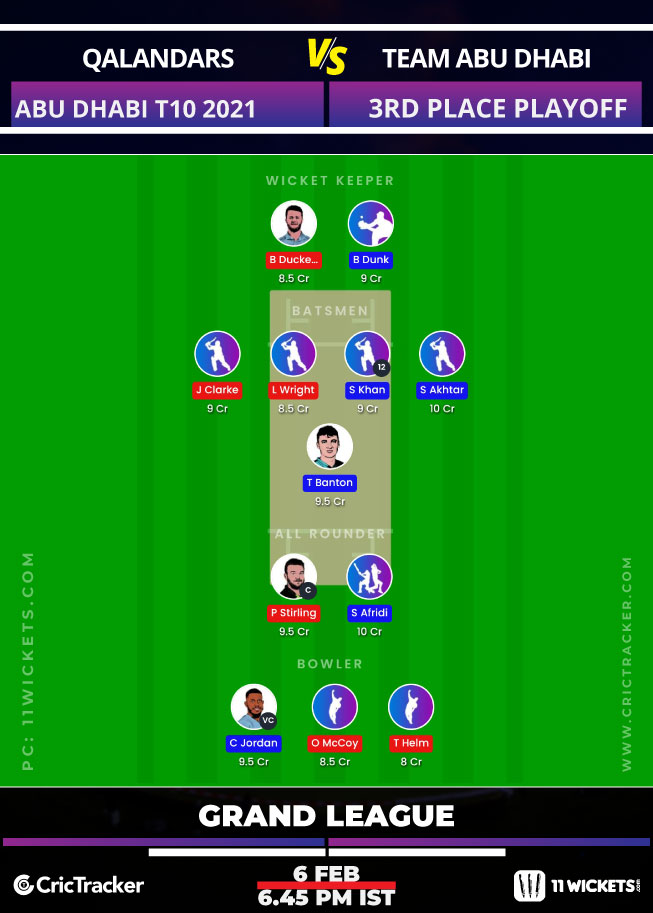 Paul Stirling can be a good pick for captaincy. He has been performing consistently well from the last couple of matches and can do well in this match as well.

Team Abu Dhabi are expected to win this match.