The conditions are expected to be cloudy with high chances of precipitation.

After the shimmer of the first two days, the Qatar T10 League continues its journey to enthral the audience. A total of 6 teams will be eyeing the ultimate prize in the fast-paced league. The tournament will be played in a round-robin format followed by semifinals and the final.

The fourth match of the fast-paced league will be played between Desert Riders and Flying Oryx. Both the teams have started off their campaign in style by registering victories in their opening matches. In their inaugural match against Pearl Gladiators, Oryx cruised to a formidable nine-wicket triumph by chasing down the target of 84 runs with 14 balls remaining. Hussain Talat grabbed the headlines by playing a brilliant knock of 59* off 29 balls.

Desert Riders also posted a convincing seven-wicket victory against Swift Gallopers in their opening match of the tournament. Muhammad Tanveer‘s unbeaten knock of 49 runs off just 21 balls guided Riders to the victory. He was also assisted by the cameo of Adnan Mirza, who smashed 23 runs off 13 balls. With an objective to go to the top of the points table, both the teams will be eager to register a victory.

The second match of the day will be played between Falcon Hunters and Swift Gallopers. Hunters were able to chase down a competitive total of 104 runs in their opening match against Heat Stormers as they cruised to a six-wicket victory. They will be eager to continue their winning momentum.

The West End Park International Cricket Stadium also referred to as Asian Town Cricket Stadium hosted six Men’s T20I matches in 2019. Most of the matches recorded totals around 160. In the first three matches of the tournament, only one encounter witnessed teams post a score more than 100 runs. However, massive totals are expected as the tournament progresses.

The conditions are expected to be cloudy with high chances of precipitation. The temperature will hover around 26 degrees Celcius according to AccuWeather.

Sohail Tanveer is expected to lead Rider from the front. He also scalped two wickets in their opening match against Gallopers. After making his debut for Pakistan in 2007, the left-arm pacer went on to play 62 ODIs for the national side. He has 71 ODI wickets under his name. Riders’ batting force will be steered by Muhammad Tanveer, who smashed 49 runs off just 21 balls in his previous match. Mohammad Hafeez is also expected to play a vital role.

Hussain Talat stole the limelight in his previous match with an impressive knock of 59 runs off 29 balls. The skipper is expected to lead his side from the front. Naved Malik also delivered an impressive spell by scalping two wickets and conceding 26 runs.

The prediction is for Flying Oryx to win the match. 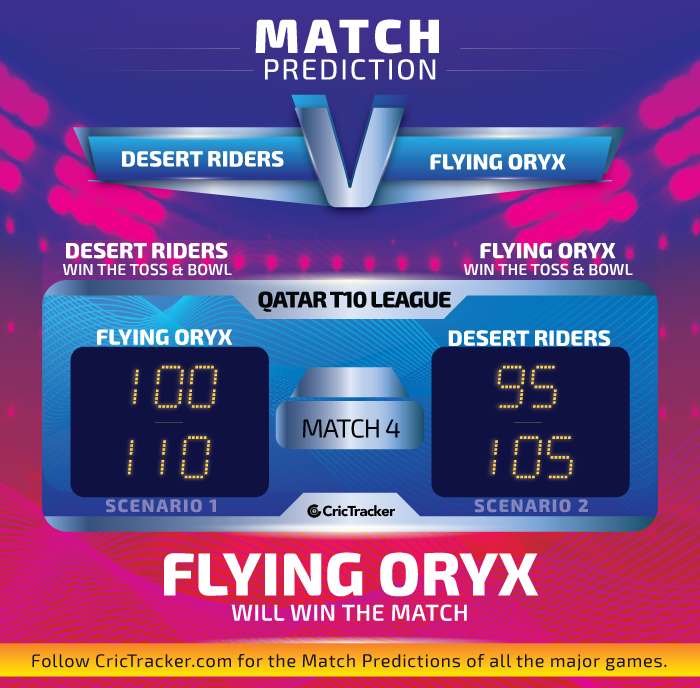 Hunters probably have the strongest batting force in the league. All eyes will be on Hashim Amla, who failed to impress in the last few matches of the Abu Dhabi T10 League. The veteran scored 17 runs in his opening match of the Qatar T10 league. Salman Butt, who scored 39 runs off 27 balls in his previous match will be aiming to propel his side to a good start.

The in-form Luke Wright was on the bench in Gallopers’ opening fixture of the league. He is expected to break into the side in the upcoming fixtures. Skipper Kamran Akmal, who scored 29 runs off 13 deliveries in his previous match, will be aiming to guide his team to their first victory of the tournament. Ravinderpal Singh also had showcased decent all-round performance in his previous match. 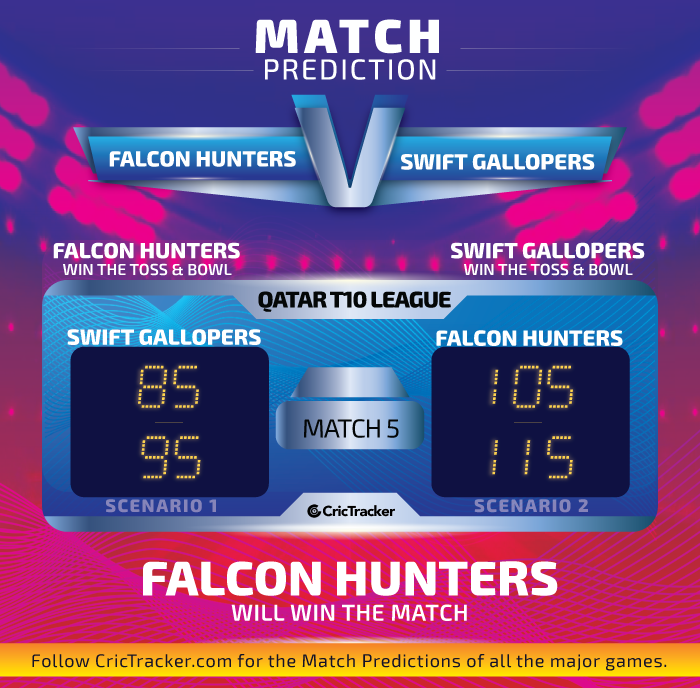