Quiz: How well did you follow Royal Challengers Bangalore in IPL history?

Quiz: How well did you follow Royal Challengers Bangalore in IPL history?

RCB is among the three teams that have not won the trophy despite playing from the inaugural season. 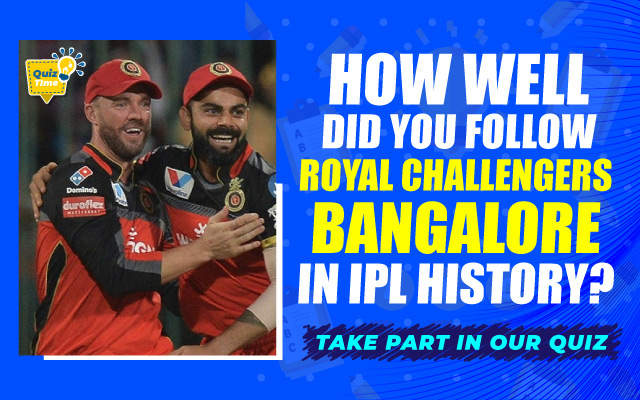 Indian Premier League (IPL) has been established as the best T20 league in World Cricket. It has proved to be an excellent platform for many young stars to perform and get recognition. It has not only helped the Indian players but the cricketers across the globe. In the 13 completed seasons of IPL so far, we have seen some teams being more consistent and dominant than others.

Mumbai Indians with five trophies is the most successful team of the league history followed by Chennai Super Kings with three titles. There are only three teams in IPL history so far which have been featuring from the first season in 2008 but are yet to win a cup. This includes Royal Challengers Bangalore, Delhi Capitals and Punjab Kings. Among these, the RCB team has got the highest and most loyal fanbase.

The team is led by Indian skipper Virat Kohli, and its fans have been waiting patiently to see the team win the first-ever title. Though the team reached the finals of the tournament three times, it had to face defeat on all three occasions. In IPL 2009 final, Deccan Chargers defeated RCB by just 6 runs to win the trophy in the second edition. DC had set a target of 144 runs but RCB could manage only 137/9 in 20 overs.

In IPL 2011 final, the team was up against Chennai Super Kings who scored 205/8 while batting first. The batting line-up of the Bangalore team faltered again, and it was restricted to 147/8 losing the game by 55 runs. The team then had to wait for five years to play a final, and it finally happened in IPL 2016.

In the IPL 2016 final, SRH put up a big total of 208/7 in 20 overs with excellent knocks from David Warner, Yuvraj Singh and Ben Cutting. RCB started well in the chase with a century opening partnership between Chris Gayle and Captain Virat Kohli. However, SRH made a good comeback in the second half to restrict the team to 200/7 to win their first trophy.

In IPL 2021, RCB was looking good until the tournament was stopped midway due to COVID 19. It has won five out of seven games till now and would be looking to finish in the top 4 with the remaining games to be played in UAE. If you think, you are a loyal follower of RCB, here is a quiz for you.