Steve Smith and Faf du Plessis seem to be the favoured options to make captain in the game between Rajasthan and Chennai. 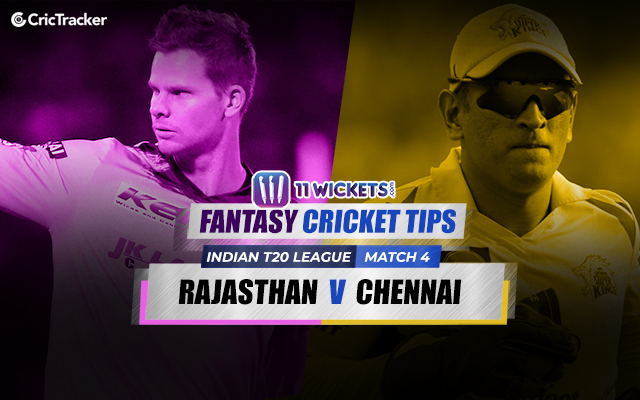 The 4th match of the Indian T20 League 2020 will be played between Rajasthan and Chennai at the Sharjah Cricket Stadium in Sharjah. We have got the best Rajasthan vs Chennai team prediction for today’s match.

After having played and won the opening game of this season of the Indian T20 League, Chennai will be facing off against the team from Rajasthan, who will be playing their first match this season. The runners up from last year’s edition, Chennai have made sure that they carried forward their form into this season. And, they beat all the odds and went on to win their match against Mumbai, starting off their campaign on a winning note. The team would look to win this match and continue their winning run.

The last season of the T20 League was not good at all for the Rajasthan based franchise. In their quota of 14 matches, they managed to win only 5 matches and were placed at the second last position in the points table. So, this year, the team which has the might of Steve Smith and Jofra Archer playing for them will be looking to make it to the top 4 and their opening game would play an important part in setting the tone for the rest of their campaign.

Tuesday is expected to bring along clear skies, with no cloud cover or chance of rainfall, which means that a full-length match is on the cards. The temperature is expected to be in the 34 to 37 degree Celsius range.

The pitch at the Sharjah Cricket Stadium would be fresh and completely new when the teams take the field on Tuesday. In terms of behaviour, the track is expected to be decent for batsmen and chasing is going to be a preferred option.

Dwayne Bravo has been ruled out of this match, and would not be playing. Ruturaj Gaikwad has cleared his Covid-19 Test and is available for selection.

For Rajasthan, Jos Buttler is in quarantine having travelled out of the bubble with his family, so he will also be missing this match.

Ben Stokes too has not yet joined the Rajasthan team and is expected to make it to the Rajasthan camps no sooner than the second half of the tournament.

The captain of the Rajasthan team, Steve Smith will be available for selection in this match.

Yashasvi Jaiswal (8.5 credits) – Yashasvi Jaiswal has been doing well for the India U19 team and will be looking to make his mark in this season of the T20 League. He can score runs quickly as he boasts a strike rate of 91.53 in List-A cricket.

Shreyas Gopal (8.5 credits) – Shreyas Gopal did well for the Rajasthan team in 2019, taking 20 wickets in the 14 matches he has played in. 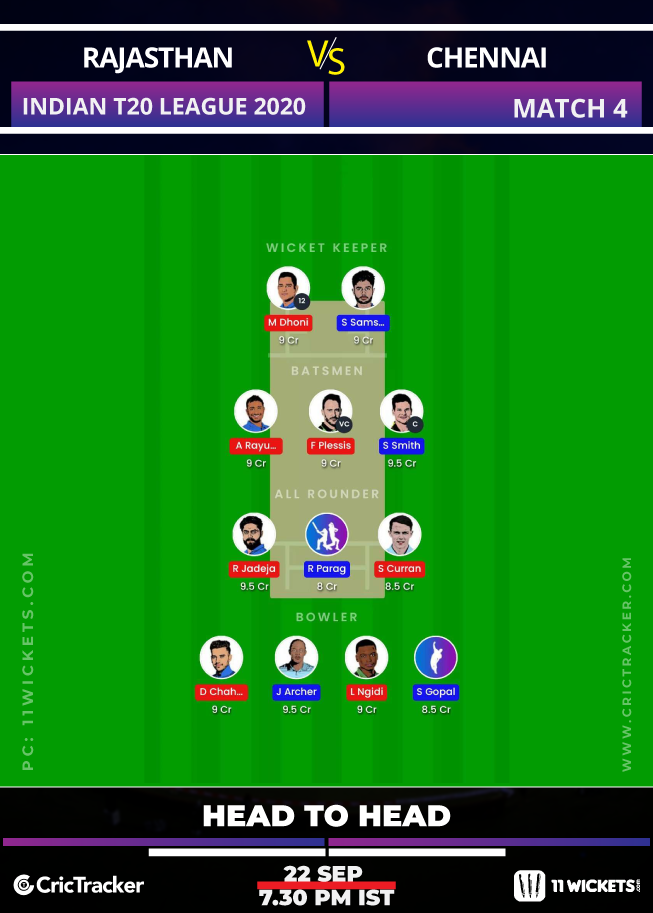 Sanju Samson has, year after year, proved his prowess with the bat in hand in the Indian T20 League. He has played in as many as 93 matches in the tournament and has a good amount of experience on his hands in order to make it big in this edition of the tournament. Hence, he is an apt candidate to be made the captain of your 11Wickets fantasy team.