Gujarat will start as favourites against Kerala due to a better all-round squad at their disposal.

Kerala made it to the quarter-finals of Ranji Trophy for the second season in a row something they couldn’t achieve even once till end of 2016-17 season. The inclusion of Jalaj Saxena has improved the quality as the all-rounder contributes with both bat and ball. Kerala proved they are a solid team without Saxena when they defeated Himachal Pradesh in the do-or-die last round as the MP-born player was out injured. They will be hosting Gujarat in the quarter-final game starting on Tuesday.

Parthiv Patel has returned from Australia after being part of India’s victorious Test squad in Australia. The 32-year-old will be leading Gujarat in the knockout phase as they aim for their 2nd Ranji Title in three seasons. It will be interesting to see who he replaces in the XI. The keeper-captain is expected to take the place of Rujul Bhatt who is the only specialist Gujarat batsman to not score a century this season. Rujul, however, has scored 462 runs at an average of 42 with three fifties thus far.

The 4th Quarter-Final game of the Ranji Trophy 2018-19 will be played between Kerala and Gujarat at the Krishnagiri Stadium in Wayanad, Kerala.

The Krishnagiri Stadium in Wayanad hosted the game between Puducherry and Sikkim earlier this season which was a high-scoring one. However, the pacers had made merry in favourable conditions during the three matches played at this venue in the 2016/17 Ranji season played with a neutral venues concept. Once again, a pace-friendly track can be expected at the Wayanad.

Kerala finished 4th in the Elite Group A and B with 26 points from four outright wins and a draw out of 8 matches while they lost three.

Gujarat finished 5th in the Elite Group A and B with 26 points that they earned on the back of three outright wins and five draws from 8 matches.

Parthiv Patel will be available for Gujarat during the knockout phase of Ranji Trophy.

There is no news on Jalaj Saxena’s injury.

The India Under-19 player Siddharth Desai has been a key player for the Gujarat team. The left-arm spinner has claimed 52 wickets in his short 11-match first-class career with five 5-wicket hauls. In the ongoing season, Desai is Gujarat’s leading wicket-taker having picked up 23 wickets from six matches at an average of 25.08. However, he will be less effective if the track doesn’t help spinners. Desai bowled only two overs for 28 runs in the previous game against Maharashtra in Pune.

Priyank Panchal’s form and Roosh Kalaria’s effectiveness are expected to make a difference in this game. The duo can be picked up as captain or vice-captain. Nagwaswalla and Sandeep Warrier are options for the vice-captain’s place. Saxena could be your captain/vice-captain depending on his availability. 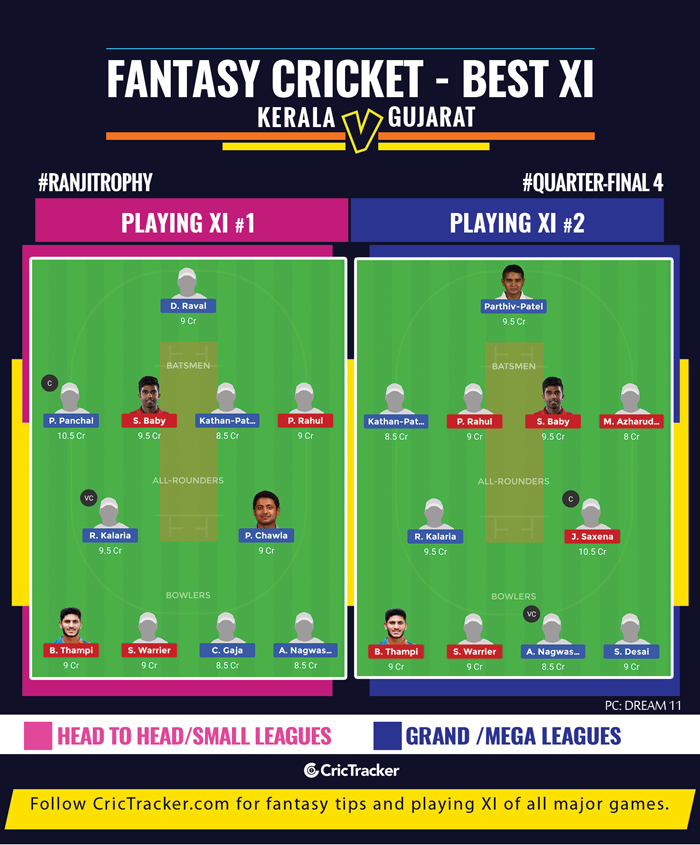 There is no update on Jalaj Saxena’s injury and picking him might be risky. Given the high prices of players on both sides, his absence might actually work well for fantasy players.

Gujarat will start as favourites against Kerala due to a better all-round squad at their disposal.