Royal Challengers Bangalore (RCB) and Kolkata Knight Riders (KKR) have had pretty similar outings thus far in the 2020 edition of the Indian Premier League (IPL). Both teams have four victories from six matches and are in the middle of the points table.

However, it’s KKR, who’s at third with a higher net run rate of +0.017 as compared to Virat Kohli and Co, who have a net run rate of -0.820. But RCB would be high on confidence after their resounding victory over the Chennai Super Kings (CSK) on Saturday.

The Challengers would also be playing their first game in Sharjah against the Knights on Monday, October 12. KKR, on the other hand, got out of jail somewhat against the Kings XI Punjab (KXIP). They will need to be more clinical in order to secure their place in the next round.

The pitch in Sharjah has been a batsman’s paradise thus far and bowlers haven’t had much to do in the tournament. The short boundaries won’t make things easier for the pacers and spinners by any means.

Out of the five games, the chasing team has lost four. Hence, batting first should be the way forward for the teams. The temperature will be around the 33 degrees Celsius-mark.

Playing Combinations for RCB vs KKR

Virat Kohli has scored a couple of fifties in the ongoing tournament and has found his rhythm after a few low scores. Against KKR, the RCB captain has decent numbers as well.

In 21 innings, the 31-year-old has 674 runs at an average and strike-rate of 37.44 and 131.64 respectively. Last year, the Delhi-born also notched his fifth IPL century against the Knights at the iconic Eden Hardens in Kolkata.

Andre Russell might be playing at an average of 11 in this IPL, but his numbers against RCB look scary, to say the least. In nine matches, the Jamaican has 323 runs at an average and strike-rate of 53.83 and 227.46 respectively.

Last year, he thumped the Challengers, though one of his knocks in Kolkata went in vain. Russell may not bowl though after he sustained a leg injury last time around.

RCB vs KKR Head to Head 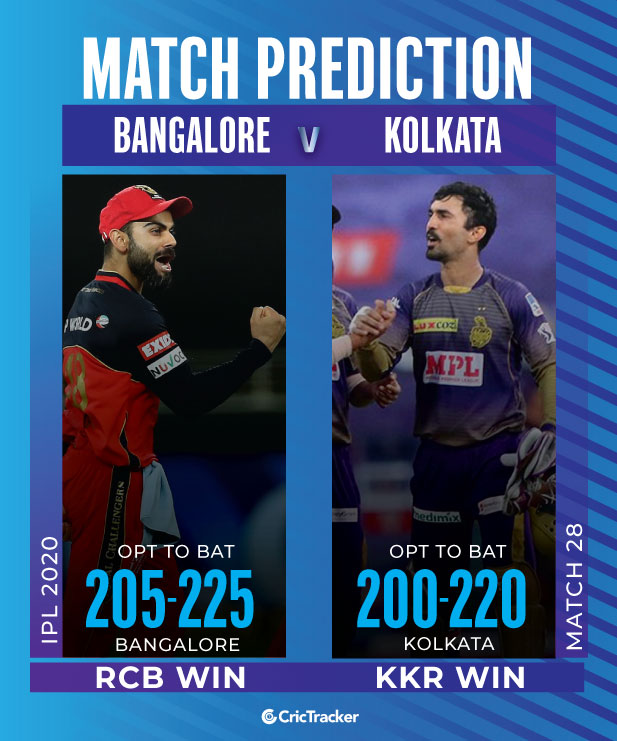