Kevin Pietersen is maintaining his fitness very well and given his T20 experience, he can be a great captaincy choice.

The 7th match of the Road Safety World Series 2020-21 will be played between England Legends and Bangladesh Legends on 7th March at Shaheed Veer Narayan Singh International Stadium in Raipur.

England Legends will be up against the Bangladesh Legends in the 7th match of the Road Safety World Series 2020-21 on Sunday. England Legends weren’t part of the initial tournament. Under Kevin Pietersen’s captaincy, they will be participating for the first time in this tournament. Their bowling unit looks really dangerous with the likes of Sajid Mahmood, Ryan Sidebottom, Matthew Hoggard and Monty Panesar. Apart from skipper Kevin Pietersen and Owais Shah, the batting department looks a tad fragile with not enough big hitters.

On the other hand, Bangladesh Legends had a poor game against India Legends in their first outing. They were defeated by a margin of 10 wickets with still 59 balls left in the game. Mohammad Nazimuddin’s 49 runs upfront with the bat was the only positive takeaway from their 1st game. They will become easy fish for every opposition team if they perform like this, and hence need to put up a better show today.

The weather will be perfect to play cricket in the evening in Raipur with the temperature ranging between 31 and 23 degrees Celsius and the humidity will be 23 percent. There is no chance of rain for this match.

The surface is completely suited for the batsmen. They will get full value for their shots if they place the ball in the gap. There is some extra bounce in the surface for the quick bowlers. The outfield is really fast and the bowlers need to bowl to the field. Toss will play a crucial role and whoever wins should bowl first on this track.

109 (Considering the last match played on this venue)

Owais Shah has got huge experience in this T20 format and has played in the IPL before. He is a clean striker of the ball and likes to take the game till the end. In 17 matches for England, he has scored 347 runs at an average of 24.78. with the highest score of 55*.

Kevin Pietersen is going to be one of the main attractions in this tournament. He has won many matches single-handedly during his cricketing days for England. In his entire T20I career, he has scored 1176 runs in 36 innings at an average of 37.93 and a strike rate of 141.5,  including 7 half-centuries.

Sajid Mahmood is a tall fast bowler who bowls at a good pace and can cause great damage. He has played only 4 T20Is for England and has picked up 3 wickets, but he also has played 26 ODIs and 8 Test matches.

Mohammad Nazimuddin just missed his half-century by a run in the first match against the mighty India Legends. He was the only savior with the bat for his side, scoring 49 runs from 33 balls, which includes 8 fours and a six.

Javed Omar was batting quite well in the first game against India Legends, but was unfortunate to get stumped when he was on 12 runs. 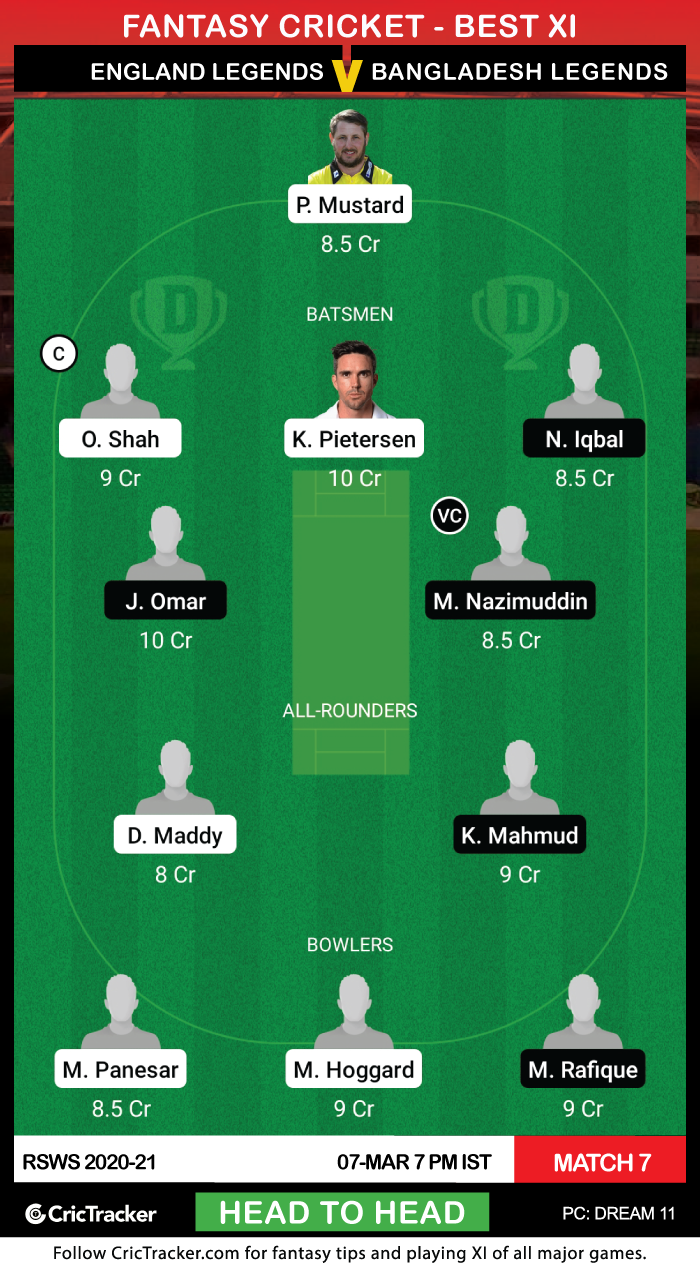 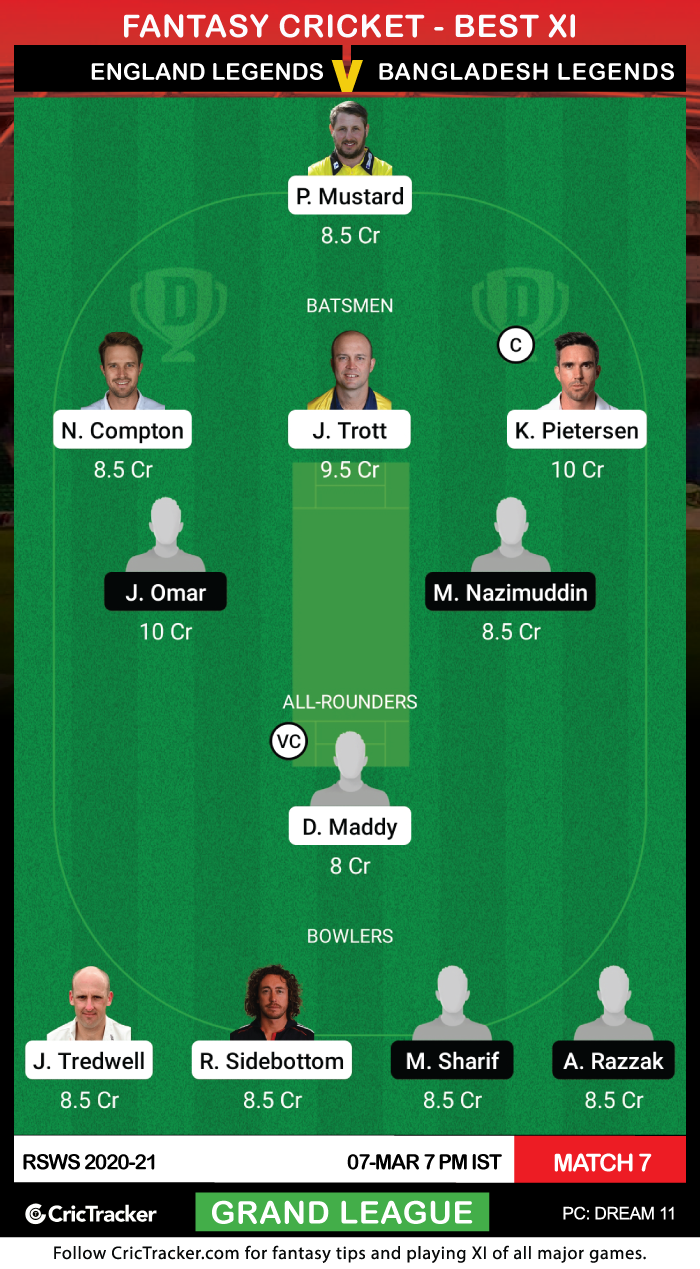 Kevin Pietersen is maintaining his fitness very well and given his T20 experience, he can be a great captaincy choice.

England Legends are expected to win this match.