Kyle Abbott has picked up 14 wickets in only six matches in this tournament.

Hampshire and Sussex, the top sides in the South Group of the Royal London One-Day Cup, will lock horns on Thursday at the Ageas Bowl. Hampshire sits firmly on the top of the South Group ladder having won five of their six matches thus far. They won each of their first four matches before losing to Essex in a big run-chase. They bounced back with a 53-run win against Surrey on Tuesday but will miss the services of James Vince from here on.

On the other hand, the Sussex team are placed at 3rd as they won four out of their five matches. Somerset is ahead of Sussex at the moment due to NRR despite playing six matches for four victories. Sussex got in form Luke Wright on their side who announced his retirement from first-class cricket recently. The Pakistan pacer Mir Hamza’s addition boosted their bowling attack. Hamza became the first bowler to claim a 4-wicket haul on List A debut for Sussex.

The 2019 Royal London One-Day Cup game between Hampshire CC and Sussex CC in the South Group will be played at the Rose Bowl in Southampton.

This match can be streamed live on Hampshire County Cricket’s YouTube Channel.

The Rose Bowl has been a venue of the big totals in the recent times as no team has scored less than 290 while batting first in the last two editions of the One-Day Cup. The venue even witnessed a successful chase of the 357-run target during the previous edition.

James Vince will be away on International duty and Joe Weatherley has replaced him in the Hampshire squad.

Liam Dawson’s exploits in this season will make him a must for one of the multiplier options. David Wiese also falls in this category due to his all-round skills. Aiden Markram is chipping in a couple of overs and has a habit of picking up wickets. Kyle Abbott has three 3-wicket hauls and five games of 2+ wickets out of the six matches he played in the tournament. 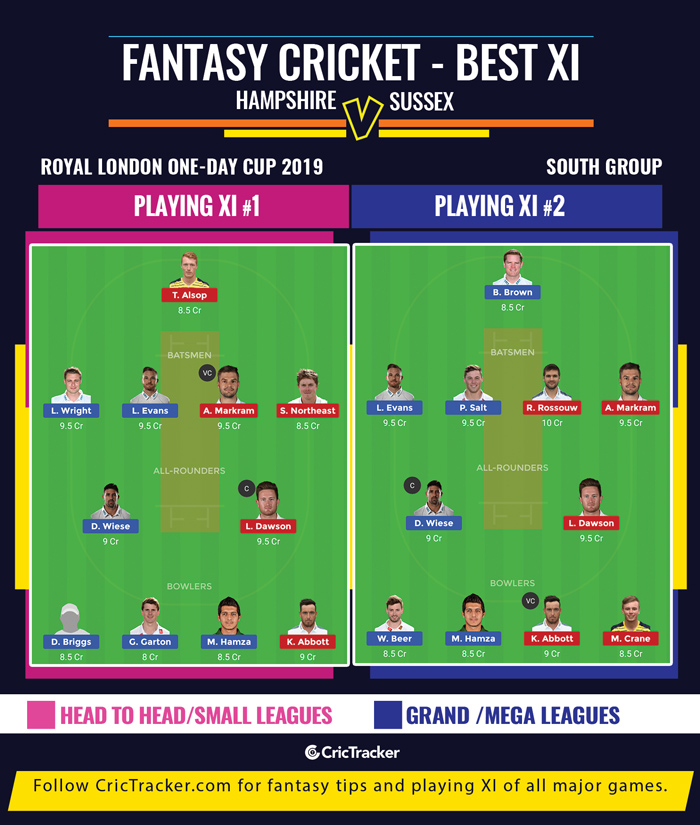 Most of the players in the bowlers’ category for this game have had 20+ points in almost all matches they played. Among those, only Mir Hamza, Kyle Abbott and Danny Briggs look the best given their experience and record in this format.

Hampshire needs their top-order to come good in the absence of James Vince to defeat the inform Sussex.