James Vince has scored 402 runs in five innings he has batted in this tournament.

The in-form Hampshire team will take on the Surrey in the One-Day Cup game on Tuesday at the Kennington Oval. The two teams have had contrasting journies as Hampshire won four of the five they played while Surrey lost four in the same number of matches. Hampshire had won each of their first four matches before losing to Essex on Sunday by a huge 111-run margin. The game against Surrey will be a crucial one for James Vince to get a World Cup ticket.

After Alex Hales withdrew himself from the England World Cup squad, Vince could be picked as a replacement for the big event as he got included for the ODIs against Pakistan. The Surrey team, on the other hand, haven’t been consistent with injuries to their players playing a role. As per the Surrey release, as many as 11 players are nursing injuries or not available for the first team selection. They will be hoping to get on a winning streak with South African Internationals in the side.

The 2019 Royal London One-Day Cup game between Hampshire CC and Surrey CC in the South Group will be played at the Kennington Oval in London.

This match can be streamed live on Surrey County Cricket’s YouTube Channel.

The two matches in the RLODC at the Kennington Oval thus far suggests that the venue has been on the dry side. Spinners claiming 4-wicket hauls in the previous matches at this venue hints at the help to the spin bowlers.

Ben Foakes and James Vince will join England’s squad for the matches against Ireland and Pakistan after this match.

James Vince and Ben Foakes will be hoping to finish their RLODC campaign on high and carry the momentum into the crucial ODI series. Liam Dawson and Morne Morkel have been consistent throughout the tournament. 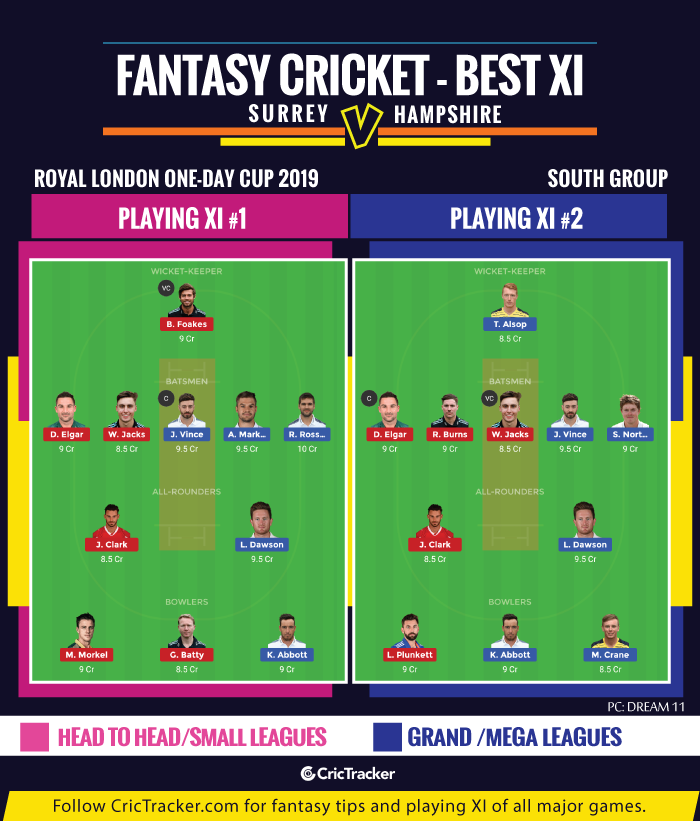 The batsmen category is packed with performing players inform of Vince, Jacks, Burns, Rossouw, Elgar and Markram. Vince is determined for a big knock keeping CWC in mind while Markram and Jacks could be handy with the ball at the Oval. Elgar’s left-arm spin could also add variety in the middle-overs.