With a 6-6 head-to-head count, there's nothing to separate the two teams.

The points table in the bottom half is getting cramped up with every passing game. Teams have neither been eliminated nor have they made the playoffs in the 2020 edition of the Indian Premier League (IPL).

The 40th match of the league stage will be played between the Sunrisers Hyderabad (SRH) and Rajasthan Royals (RR) on Thursday, October 22 at the Dubai International Cricket Stadium. Both sides are in similar positions, having lost six matches. In their last meeting at the same venue, it was the Royals, who came out trumps.

Steve Smith and Co also won their previous game against the Chennai Super Kings (CSK) by seven wickets. The Sunrisers, led by David Warner, are on a three-match losing streak and desperately need a victory to get back to winning ways in the T20 league.

The pitch in Dubai has started to get better for batting with every passing match. It has helped the bowlers, but the batters have been able to play their strokes freely.

Teams, batting second have also started to taste quite a bit of success. The playing conditions will be warm with the temperature around the 30 degrees Celsius mark. The humidity will be in the 40s with dew unlikely to play a part.

Playing Combinations for RR vs SRH

Steve Smith has found his form back after a string of low scores. He scored a half-century against the Royal Challengers Bangalore (RCB) to arrest his slump.

Though he didn’t get a whole lot of runs against the Super Kings, he made sure that he lent Jos Buttler the support. Thus far, Smith has 246 runs at an average of 27.33. The Aussie can take confidence from the three fifties he has scored.

Jonny Bairstow has looked fluent at the top of the batting order. He has been able to give SRH the start they need in the mandatory powerplay.

In nine games thus far, the Englishman has 316 runs at an average and strike-rate of 35.11 and 128.97 respectively. The last time when he played against the Royals, he got out cheaply. This time around, the Sunrisers’ opener will want a substantial score.

RR vs SRH Head to Head

The prediction is for Sunrisers Hyderabad to win the match. 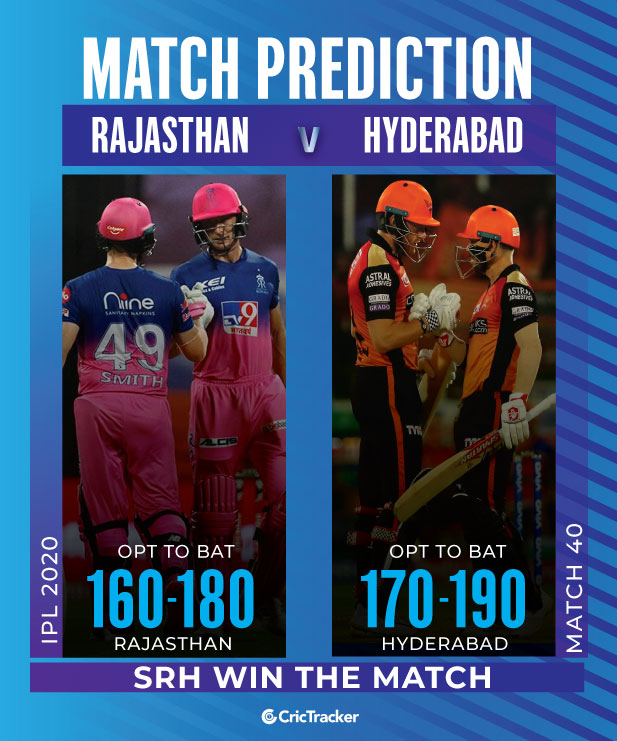