Unlike the Proteas, visitors, England have had ample ongoing activity despite the pandemic, and they must been credited for bringing back the derailed game on track.

After some enthralling action in the Indian T20 League, the time for international action has arrived. 27th November marks the initiation of three such tours, one of which would see England taking on hosts South Africa at Cape Town in the first T20I of the three-match series.

For South Africa, Kagiso Rabada and Anrich Nortje, who both were burning form in the IPL, will look to continue in the same vein, whereas Quinton de Kock and Faf du Plessis, who ended as the leading run-scorer for his franchise, would be keen to emulate their form as they head into international action. Ahead of the series, South Africa has plenty to worry about off the field too, given many unwanted crises that have unfolded for them in the recent past. Although, for now, the best way to throw all of that under the carpet would be to resume the game on a high.

With some T20 specialists on both sides, this contest is mouth-watering, to say the least. However, the Proteas, who have not played any professional cricket in the last nine months, and the last they featured in a limited-overs series was against Australia in February-March this year.

Unlike the Proteas, visitors, England have had ample ongoing activity despite the pandemic, and they must been credited for bringing back the derailed game on track in July. With the likes of Roy, Buttler, Malan, Bairstow, Morgan, and Stokes, they look a side as strong as any, whereas, Moeen Ali, Chris Jordan, Adil Rashid, Jofra Archer, and Tom Curran only makes England the overwhelming favorites in the series.

A balanced track awaits the two sides tomorrow. Like most of the tracks in South Africa, Cape Town, too, is known for offering a fair bit of bounce and swing off the surface, and the presence of some remarkable pacers on both sides only make the prospects interesting for the clash.

Playing combinations for Eng vs SA

Jofra Archer had an outstanding run at the IPL this year. Despite the lack of support from the other end, he bagged 20 wickets in 14 matches for his franchise Rajasthan Royals and bowled exceptionally well at both death and powerplay. Despite bowling the majority of his overs in the powerplay, his economy (6.55) highlights how efficient and disciplined with the ball in hand.

Quinton de Kock ruled the roost in the IPL with his bat. With 503 runs in 16 innings at a strike-rate above 140, he ended up as one of the top-scorers and played numerous crucial knocks at his slot. Furthermore, against England, de Kock has an impressive record, and he has scored 212 runs at 42.40 and a strike rate of 179.66 in 5 matches.

ENG vs SA Head to Head 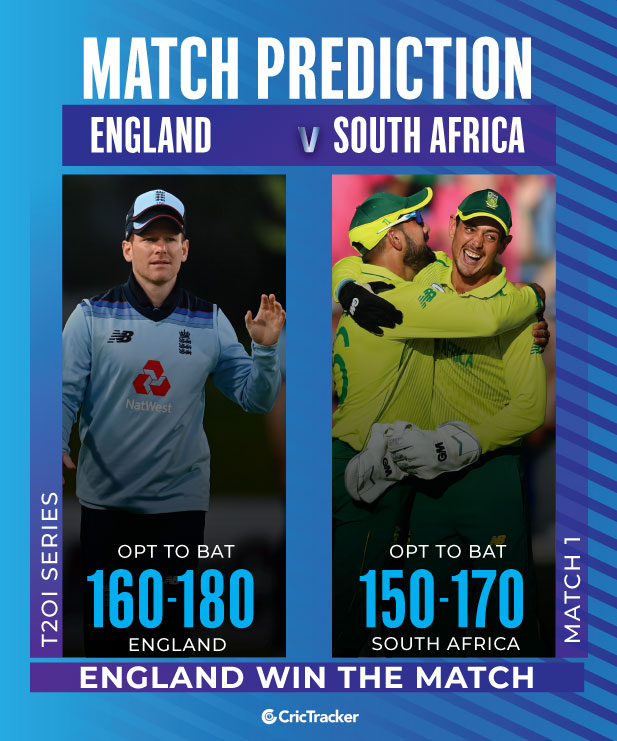