Sanju Samson or Rishabh Pant? Rohit Sharma has his say on wicketkeeper for T20I series

Sanju Samson or Rishabh Pant? Rohit Sharma has his say on wicketkeeper for T20I series 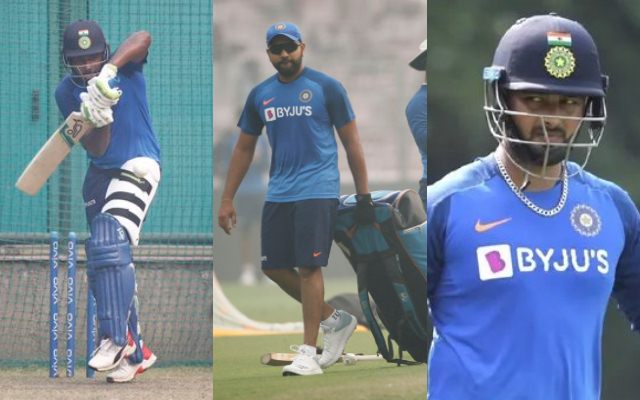 Indian selectors picked two wicketkeeping options for the upcoming T20I series against Bangladesh. And, there was a confusion in the minds of fans and former cricketers over which player will stand behind the stumps for Team India. But on Saturday, Rohit Sharma, the stand-in captain cleared all the doubts.

After four long years, Sanju Samson marked his comeback into the T20I squad on the basis of his remarkable form in the domestic tournaments whereas Rishabh Pant, who was looked down as the successor of MS Dhoni by the selectors, is still due to prove his worth in the national side.

Rohit Sharma picks one between Rishabh Pant and Sanju Samson

In the pre-match press conference, Rohit said that Samson and Rishabh are very talented, but they will go with Rishabh Pant as their main wicketkeeper in this series. He also added that the Delhiite has played only 15-20 T20Is, so it is very early in order to pass any judgment on the young wicketkeeper.

“Both wicket-keepers (Rishabh Pant and Sanju Samson) that we have in our squad are pretty talented. We have stuck with Pant, this is the format that gave him recognition. We have to stick with him for a while, we know how well he can take the game forward if he has his day,”  Indian T20I skipper said in the pre-match press conference.

32-year-old also recited that Mumbai all-rounder Shivam Dube can get his debut against Bangladesh, but it all depends on the conditions. Even Sanju Samson also holds a chance of getting his first match after a gap of four long years in Indian jersey.

“We will assess now and probably a bit before the game as well. But both (Sanju and Dube) are definitely in the fray. One of them might definitely play. You might see in playing XI. All doors are open for everyone. Anyone might come into the playing XI any moment,”  he added.

In the absence of Virat Kohli, who has been rested for the T20I assignment against Bangladesh, the right-handed Indian opener will lead the team in three-match series.