Sara Tendulkar celebrates with parents after completing graduation in London

Sara Tendulkar celebrates with parents after completing graduation in London

Co-incidentally, even her mother Anjali Tendulkar is a doctor.

Sachin Tendulkar garnered numerous laurels over the years, representing India at the highest level. The Master Blaster boasts of a staggering 100 international centuries, which doesn’t seem to be surpassed at least for the time being. The legendary batsman hung his boots from the sport in 2013 and yet his fandom hasn’t died down by any stretch of the imagination.

To carry forward his legacy, even Arjun Tendulkar has started playing his trade in cricket. He has recently represented the India U19 team during the tour of Sri Lanka. However, he doesn’t feature in the One Day team for the reason that he won’t be eligible to play the 2020 U19 World Cup. Hence, it’s evident that the road ahead of him isn’t a walk in the park by any means.

Sara enjoying with Sachin and Anjali

In the meantime, Sara Tendulkar, Sachin’s beloved daughter, has completed her graduation in medicine from the prestigious University College of London (UCL). The 20-year-old is seen in a black graduation gown and a cap. Co-incidentally, even her mother Anjali Tendulkar is a doctor. Both Sachin and Anjali attended the ceremony and was proud to see their daughter.

The college had a checklist on the website for the ceremony. The students were asked to keep safety pins, hair grips, a bottle of water and a pair of shoes before the event to avoid blisters. Even at a young age, Sara has become a popular figure on the social media platforms.

The same is evident from the fact that she has over 20,000 followers on Instagram, where he keeps updating her fans on a frequent basis with pictures. After becoming a graduate, Sara got herself clicked with her proud parents and pictures immediately went viral and currently has seen quite a significant amount of engagement.

Here are some of the pictures 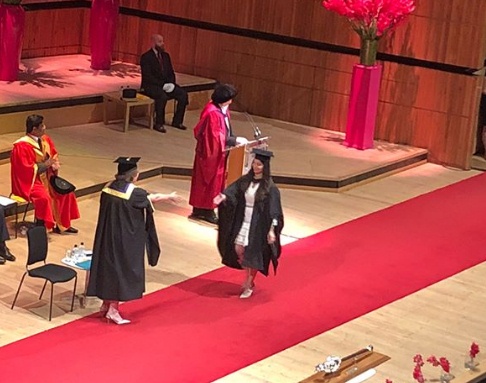