The Gladiators are out of the competition after losing their game to Kutch Warriors on Sunday.

Sorath Lions and Gohilwad Gladiators currently find themselves at the bottom of the table after some disappointing performances in their respective games. Although the Sorath Lions did open their account, the Gladiators found themselves out of the competition after losing out t0 the Kutch Warriors in game number 7.

For the Lions, it will be difficult to catch up with the top three and even if they win their remaining two games, there is no guarantee that they will be heading to the final. Their disappointing net run rate adding to Kutch Warrior’s huge win the other day makes things even more difficult for them.

The scenarios are a bit complicated as it stands, but the only way to stay in contention is to win games in the first place and then expect other things to go your way. Skipper Chirag Jani and all-rounder Dharmendrasinh Jadeja will have to bring their A game out to ensure their side has any chance of making it to the final.

The 9th match of the Saurashtra Premier League T20 2019 will be played between Gohilwad Gladiators and Sorath Lions at the Saurashtra Cricket Association Stadium in Rajkot. 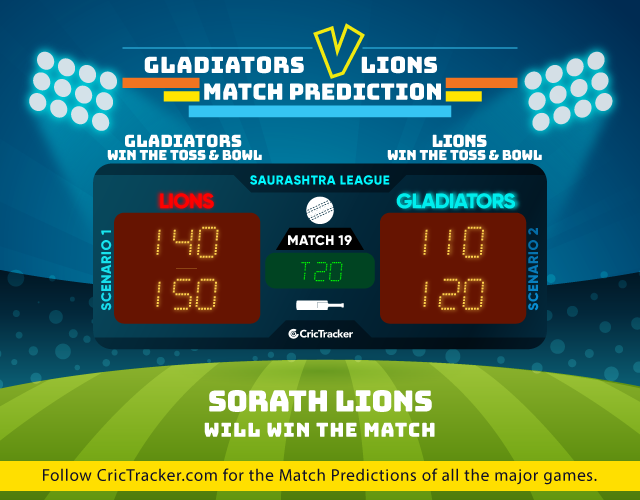 Dharmendrasinh Jadeja has been a huge force to reckon with in domestic cricket in the last two seasons and trying him as a captain can be a risk worth taking.

Get the latest Cricket News and updates from the Saurashtra Premier League, Match Predictions, Fantasy Cricket Tips and lots more on CricTracker.com.