'Oh, so I don’t have international wickets?' - Tabraiz Shamsi gets sarcastic on photo posted by Lungi Ngidi ahead of T20 WC

Ngidi posted a picture of South African pacers ahead of T20 WC.

Just before flying to Australia for the T20 World Cup, South Africa speedsters Lungi Ngidi, Kagiso Rabada, Wayne Parnell and Andile Phehlukwayo posed for a picture at the airport which Ngidi shared on his social media accounts.

Captioning the picture, the 26-year-old lauded their international career and glorified the fact of the group picking 923 international wickets in total. However, spinner Tabraiz Shamsi felt left out when he asked Ngidi why he missed his number of wickets.

“Are you in the photo?” - Ngidi’s hilarious reply to Shamsi. 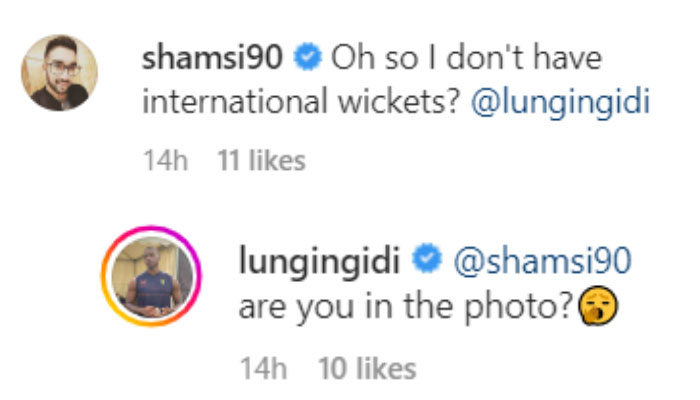 Talking about South Africa team, they recently lost the ODI series 1-2 against India and would be aiming to stage a remarkable show once they reach Australia for the mega ICC event. Talking in the same line, despite some poor performances against India, former India pacer Ashish Nehra picked Anrich Nortje as one of the X-factors for the T20 World Cup. The 28-year-old picked just one wicket in the two T20Is he played against India and went wicketless in the ODI series. However, his pace and ability to hit the deck hard will be very instrumental for the team in Australia.

“South Africa’s (Anrich) Nortje. He has also tackled injuries, but his bowling in Australia could prove to be lethal. These two bowlers could be crucial apart from all the other names I took before,” said the former India international.

Temba Bavuma-led side will begin their campaign against a qualifying nation on October 24 (Monday) at Bellerive Oval, Hobart. However, they’ll play a couple of warm-up games against New Zealand (October 17) and Bangladesh (October 19) before the main event.