The Final of the National T20 Cup will be played between Southern Punjab and Khyber Pakhtunkhwa at Rawalpindi Cricket Stadium, Rawalpindi on Sunday.

The match is scheduled to start at 7: 30 PM local time (8:00 PM IST) and will be streamed on the Pakistan Cricket Youtube channel.

Southern Punjab and Khyber Pakhtunkhwa will be up against each other in this year’s National T20 Cup final. Rawalpindi Cricket Stadium will host the final encounter between these two teams. The way Southern Punjab turned the things around in the last two matches was incredible. They chase down the target of 162 in the last league match against Balochistan in just 10.4 overs and earned the semi-final spot. Them, they outplayed the tournament favourites Northern in the semi-finals, winning convincingly by 7 wickets. Shan Masood’s unbeaten knock of 78 from 58 balls ensured the final spot for Southern Punjab. Skipper Shan Masood and his men will be aiming to lift the trophy on Sunday.

Khyber Pakhtunkhwa, on the other hand, won the  2nd semi-final against Sindh quite easily by 8 wickets. They have an upper hand against Southern Punjab since they have beaten twice in league matches. Skipper Mohammad Rizwan has led from the front, scoring 4 half-centuries. Fakhar Zaman is in great nick at the top as well. Veterans Mohammad Hafeez and Shoaib Malik have contributed really well when the team needed them. The bowling attack is led by Shaheen Shah Afridi and Wahab Riaz. Overall, their team looks more balanced and settled and capable of winning this year’s National T20 Cup.

It will be a pleasant evening and the skies will be clear in Rawalpindi. The temperature between 18 to 22 degrees celsius. There is no chance of rain for this match.

The track here in Rawalpindi cricket ground is good for batting, but it offers some assistance to the bowlers as well. It will remain the same throughout the match. Since it’s a final, whoever wins the toss should look to bat first.

Southern Punjab’s skipper Shan Masood played an excellent knock of 78* from 58 balls in taking the team to the finals. So far in this tournament, he has scored 278 runs at an average of 30.88 with a strike rate of 126.36.

Zahid Mahmood’s 3 for 28 against Northern in the semi-finals helped his side restrict their opposition to a low score. So far he has picked up 11 wickets and has maintained an economy rate of 8.58 runs per over.

Shaheen Shah Afridi has picked up 17 wickets for Khyber Pakhtunkhwa in 9 matches. He has an economy rate of 7.27 runs per over.

Fakhar Zaman has been performing well at the top. The left-handed batsman has amassed 353 in 11 innings at an average of 32. He has a brilliant strike rate of 144.67. 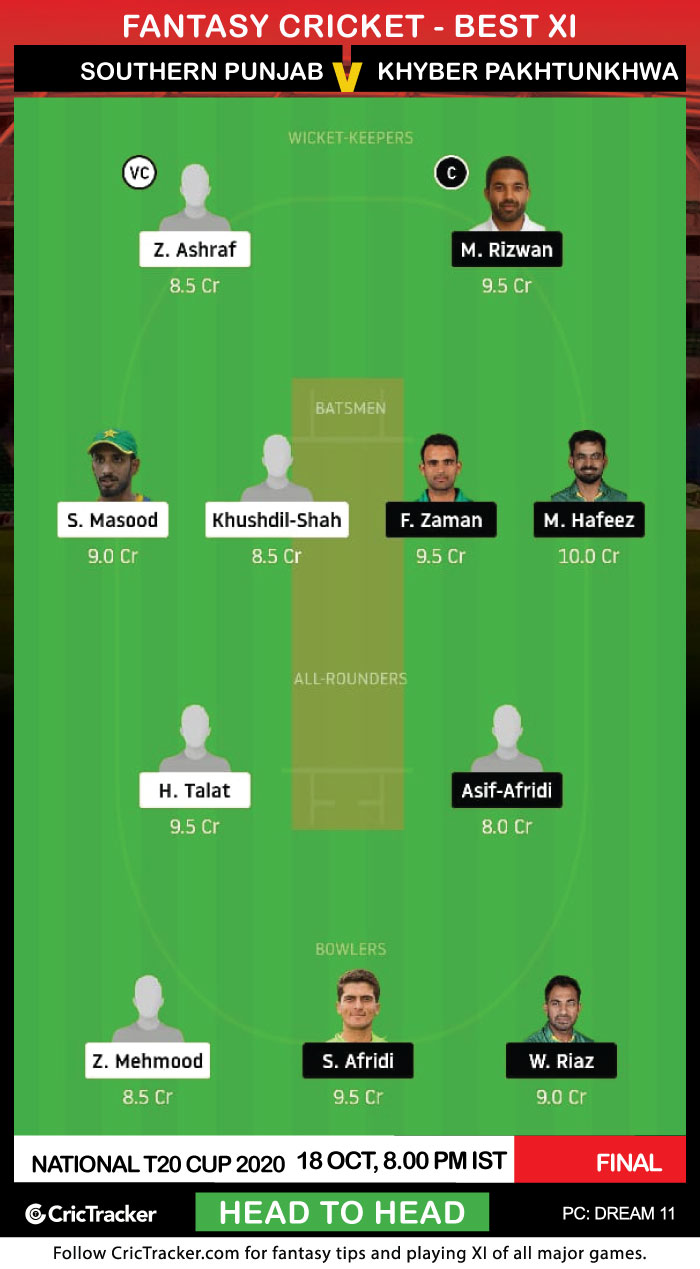 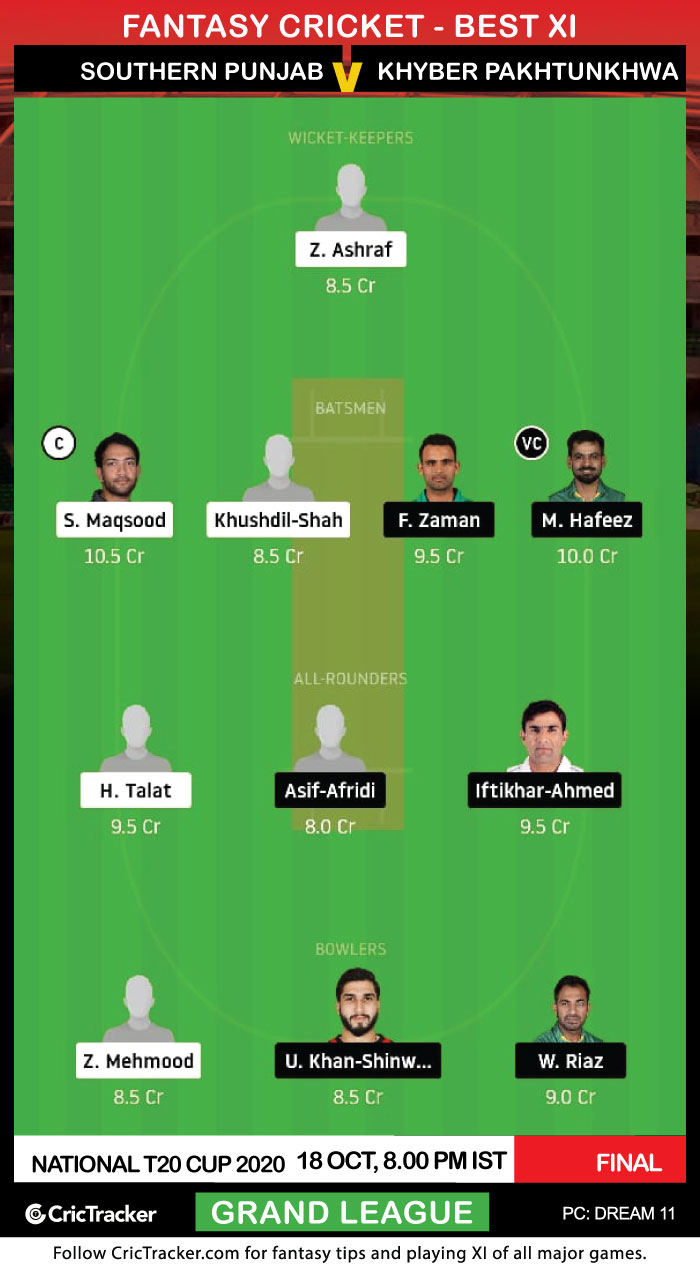 Both Southern Punjab and Khyber Pakhtunkhwa’s top-order looks formidable and they are scoring consistently for their sides. Hence, it is advisable to pick the most number of top-order batters in your Dream11 Fantasy team.