The Proteas have called up Reeza Hendricks after injuries to Temba Bavuma and Heinrich Klaasen.

South Africa fought hard against England, but were beaten black and blue by Australia in the opening T20I at the Wanderers in Johannesburg. The home team, led by Quinton de Kock, slumped to a 107-run defeat after being shot out for a paltry 89 in a mere 14.3 overs. At no point of their run-chase, did they look like getting an upper-hand after the Aussies put up a substantial 196 in 20 overs.

On an excellent batting strip, the Proteas were once reduced to 44 for seven before some lusty blows from Kagiso Rabada delayed the inevitable. The action now moves to Port Elizabeth where the second game is scheduled to be played at the St George’s Park. The venue is set to host a T20I after December 2012. It will also be the first time the Aussies will be playing a T20I here after 11 ODIs.

The venue has hosted only a couple of T20Is where the average score was 141. But in the previous edition of the MSL, the average was 167 with three out of six games going in favour of the chasing teams. Batting second should be the way forward. There are no chances of rain with the temperature around 18 degrees Celsius. The clouds won’t there with the humidity in the 50s and 60s.

Temba Bavuma missed the opening game of the series due to a hamstring strain and the hosts have called up Reeza Hendricks. Heinrich Klaasen is also injured. The Proteas may not change their bowling attack despite getting smashed. Kagiso Rabada gave away as many as 45 runs in three overs.

But he is likely to be persisted with. Even Ngidi had an off day with an economy of 12.33. Dale Steyn and Tabraiz Shamsi bowled with good rhythm with identical figures of 4-0-31-2 in Jo’burg. It goes without saying that the Proteas’ batting needs to find some momentum in the must-win encounter.

The Aussies many not tinker with their combination. After David Warner fell cheaply, Aaron Finch and Steve Smith showed their class with scores in the 40s. The middle and lower order didn’t score heavily, but got the job done with pretty handy contributions. Ashton Agar had a day to remember.

To start with, he got a cameo of 20 off nine before he ripped the hosts apart with a five-wicket haul, including a hat-trick. But it was Mitchell Starc and Pat Cummins with the initial breakthroughs. Adam Zampa also picked a couple of wickets. Richardson was the only bowler, who didn’t get a wicket. 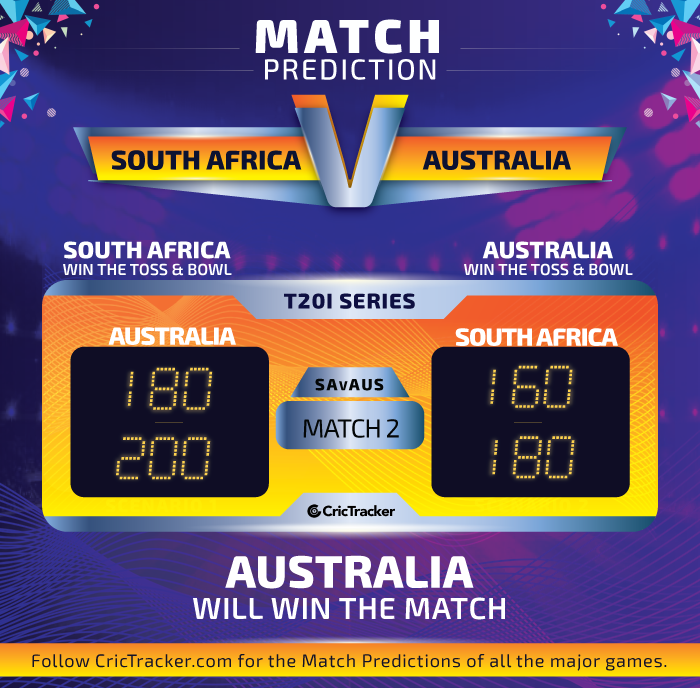