South Africa vs India 3rd ODI Match Prediction – Who will win the match?

Can KL Rahul and Co. avoid a clean sweep?

At the start of the tour, India were billed the hot favourites. By the end of it, they seem to have done hardly anything to live up to that billing. After the highs of Centurion, they plummeted to lows in Johannesburg and Cape Town, letting go of what was the “best chance” in the words of many to record a maiden Test series victory in South Africa.

If the on-field affairs were soggy, there was not much to enjoy off the field either, with Virat Kohli giving up on the captaincy of the only format he was leading by the time the series had gotten underway.

If India thought a change of format will change their fortunes, a spirited South Africa led by Temba Bavuma dashed those hopes ruthlessly, clinching successive encounters – once while defending and then chasing – to kill the series at the earliest juncture.

From being the favourites to being reduced to an XI turning out to play for pride in a dead-rubber of a series-finale, India must surely be ruing the many mistakes made in the last few days.

The 50-over games came thick and fast, and just like that, the third in Cape Town is upon them. It is the venue where India have never won a Test. It is also a venue where South Africa have won 31 of their 37 ODIs and have lost only six, two of which have come against India. Can KL Rahul and Co. avoid a clean sweep?

Where to Watch:  Sony Sports Network

Expect the new ball to do more than what it did in Paarl, although a quick outfield should mean the margin of error will be on the lower side for the bowlers. Statistically, Newlands is bat-first venue, with 28 ODIs won by teams batting first in 43 games at the venue. Therefore, the toss might play a crucial role.

Quinton de Kock was in his elements in the second Paarl ODI where his boundary-laden 78 off 66 set the tempo of South Africa’s chase and earned him the Player of the Match.

Shikhar Dhawan failed to emulate his performance from the first ODI when he scored a fluent 79 to keep India on track of the chase as he fell for 29 in the second game. But the southpaw has not held himself back, attacking from the onset when partner KL Rahul has been extremely cautious at the start. 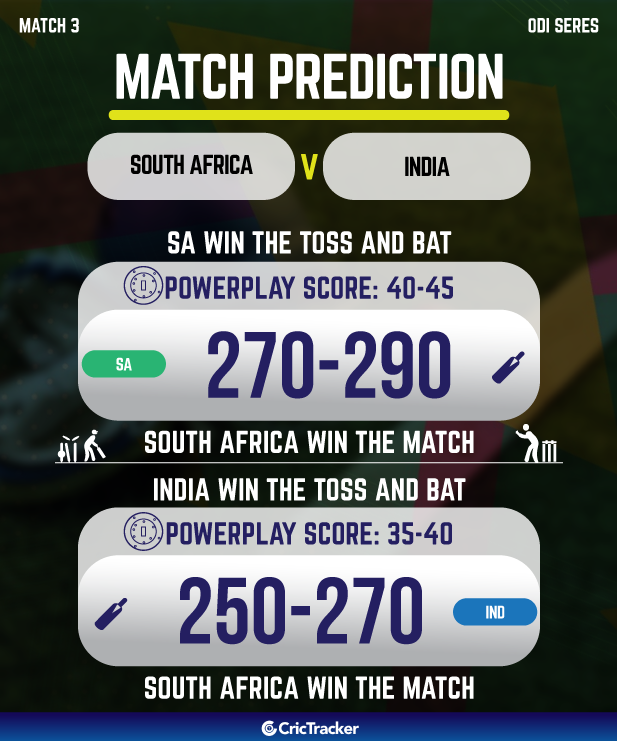