The Proteas are definitely the favourites to clinch but Pakistan won't go down without a fight.

South Africa and Pakistan will lock horns in the first of the five-match ODI series in Port Elizabeth on Saturday. After drubbing the visitors in the Tests, the Proteas are surely the favourites in the limited-overs format. Having said that, the ‘unpredictability’ of the Men in Green makes it tough for the most oppositions. Nobody knows which of their versions will turn up at the venue. This aspect makes the ODIs more interesting.

South Africa have rested Quinton de Kock and Dale Steyn for the first few matches of the series while Duanne Olivier looks set to torment Pakistan again. It will be his debut in the format if he plays. Sarfraz Ahmed-led Pakistan also have a few ODI specialists who joined the team ahead of the series and the likes of Shoaib Malik and Imad Wasim can turn the game around on any given day.

The first of the five-match ODI series between South Africa and Pakistan will be hosted by the St George’s Park in Port Elizabeth.

The Port Elizabeth is one of the rare venues existing in ODI cricket that has something for the bowlers. The not so big boundaries at this ground can allow the batsmen to come out of the pressure. Big totals will not be that easy to be chased down here under the lights. It has been nearly eight years that a team managed to post 300 in an ODI here. The last year’s ODI between South Africa and India witnessed the visitors making 274/7 and different it with ease.

Faf du Plessis is in great form and is an ideal option to be made the captain of the team. Hashim Amla is also a decent option but his form is a little bit of a concern and making him a captain or vice-captain would be a huge risk. Babar Azam is another good pick for the multipliers while Rassie van der Dussen and Olivier could be the unexpected players in Grand Leagues for the multipliers. 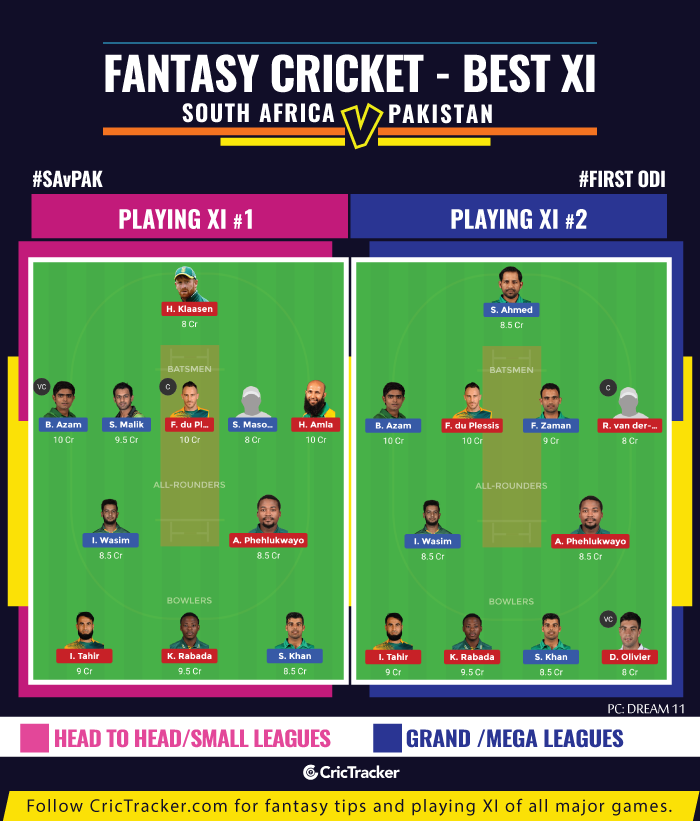 South Africa are expected to rotate their squad keeping the World Cup in mind. Reeza Hendricks, Rassie van der Dussen and Aiden Markram are expected to be under rotation policy.

Being the hosts, the Proteas are definitely the favourites to clinch but Pakistan won’t go down without a fight.