Will Pakistan be able to level the series?

South Africa managed to punch above their weight in the first T20I against Pakistan at the Newlands. This will be the must-win game for the visitors and no wonder the number one T20I side in the world will be up for it as their unbeaten record in the bilateral series since 2016 is at stake. The Proteas, however, would love to seal the series but they will have to do it without their skipper Faf du Plessis.

Du Plessis has been rested for the remainder of the series and the selectors have appointed David Miller as the captain of the inexperienced side. CSA have always experimented with the T20I team and it is no different this time. The rookies though did extremely well and it will be interesting to see if they manage to maintain consistency.

Pakistan didn’t much wrong on the flat track at the Newlands but the likes of Babar Azam and Hussain Talat must be gutted that they didn’t make the start count. Shoaib Malik played a brilliant knock and enough support at the other end could’ve helped them get over the line. Nevertheless, with enough resources at their disposal, the Men in Green remain the favourites going into the must-win encounter.

Defending a total is tough at the Wanderers generally. The pitch should be a featherbed for the batsmen with a lot of runs in it. However, it could be spice up a bit with rain around. There are chances of thunderstorms during the match and as the game progresses, the chances of rain increases from 20 to 51 percent.

Reeza Hendricks and Gihahn Cloete will open the innings while Janneman Malan is set for his international debut. Rassie van der Dussen and David Miller follow them next while Heinrich Klaasen’s role to up the ante in the death overs. Chris Morris and Andile Phehlukwayo are the twin all-rounders while Beuran Hendricks and Junior Dala are the other pace bowling resources Miller has. Tabraiz Shamsi has continued to impress with every match on this tour so far.

There is no update still on Mohammad Hafeez‘s availability and if he plays, either Asif Ali or Faheem Ashraf might have to sit out. The rest of the line-up looks settled for Pakistan. They will have to take care that one of the top-order batsmen in Babar or Talat plays till the end while the other batsmen play around them.

The prediction is for Pakistan to make it 1-1 and take the series into the decider. 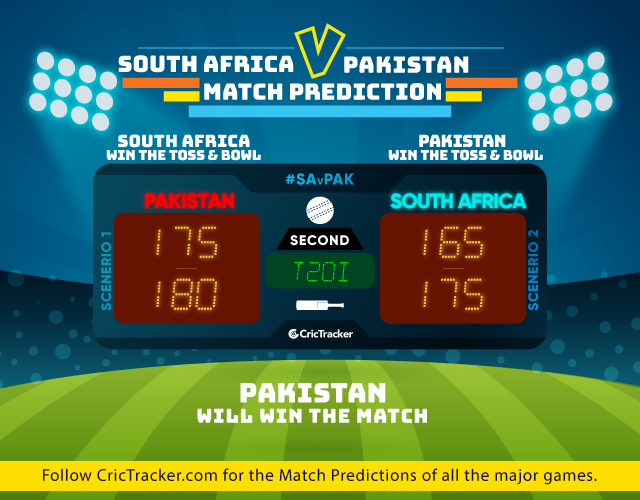