Six out of the 11 matches have been won by the team batting first at the venue.

South Africa have already won the three-match ODI series against Zimbabwe and therefore, the final encounter at Boland Park in Paarl is nothing, but a dead-rubber. However, the Proteas wouldn’t want to give Hamilton Masakadza and Co much of an opportunity to end the series in a positive manner. The Proteas’ bowling has undoubtedly been top notch, to say the least.

Nevertheless, their batting has looked a tad lacklustre in the absence of some of the prominent names. On the contrary, the visiting team’s batting hasn’t seen much of an improvement despite the inclusion of some of their best players following the dispute they had surrounding salaries and fees with their cricket board. In the meantime, they would be keen to avoid another series whitewash.

The pitch at the venue has helped the batsmen, but a few low scores in the past shows that the strip won’t be ruthless to the bowlers by any stretch of the imagination. Six out of the 11 matches have been won by the team batting first and hence, both sides may look to set a target after which their bowlers can exert pressure on the opposition batting lineup.

Faf du Plessis is likely to replace Khaya Zondo, which also means that JP Duminy will have to pass the baton of captaincy to du Plessis. The Proteas may also give Tabraiz Shamsi an opportunity in place of Imran Tahir, who picked a hat-trick last match. Lungi Ngidi may make way for Kagiso Rabada, who was benched after the opening match at Diamond Oval in Kimberley.

Solomon Mire has scored only two runs in the two outings and hence, Tinashe Kamunhukamwe may replace him. He will have skipper Hamilton Masakadza as the other opener to guide him. Ervine, Taylor and Williams, the experienced players, haven’t put up a significant performance thus far and the onus will be on them to ensure that Zimbabwe don’t suffer another humiliation.

The prediction is for South Africa to complete a clean sweep. 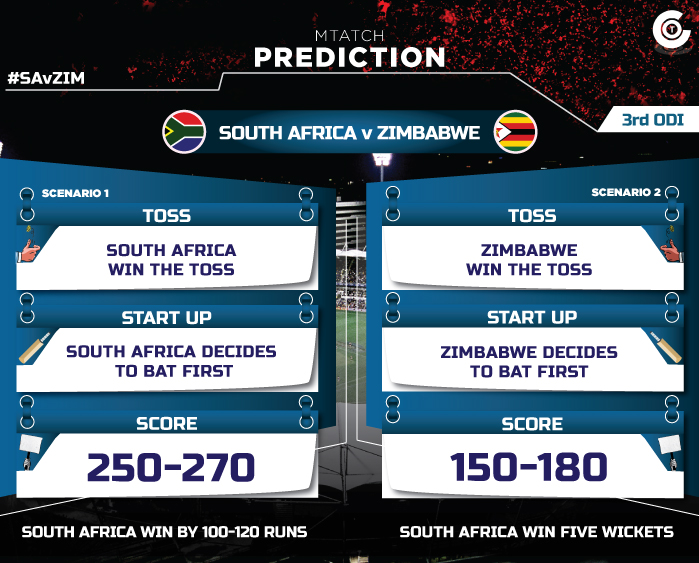