Yuzvendra Chahal was the leading wicket-taker of the ODI series with five scalps from two matches.

After an exciting ODI series, Sri Lanka and India are set to lock horns in a three-match T20I series. The opening game is scheduled to take place on Sunday, July 25 at the R Premadasa Stadium in Colombo. The hosts have some momentum in their favour after they won the third ODI by three wickets.

The Men in Blue experimented quite a bit in the last ODI, but they are likely to go back to their full-strength team for the T20I opener. On the head-to-head count, India are ahead of the Lankans by quite a distance. It goes without saying that the home team needs to put forth their A-game to come out trumps.

The pitch in Colombo has been a sporting one over the years. In the ODI series, the spinners quite a bit of assistance and the track is expected to behave in a similar manner next time as well. Batting second should be the way forward. There are chances of rain around 8 AM and hence, there could be a delay or two. The temperature will be around 28 degrees Celsius.

Prithvi Shaw was one of the three batters for India to score over 100 runs in the three-match ODI series. He even got the Player of the Match award in the first game, after he played at a strike rate of over 170. Shaw also hit the highest number of fours for the Men in Blue in the series. If he gets going in the powerplay, then the Lankans will be in for a whole lot of trouble.

Yuzvendra Chahal played only two matches in the three-game ODI series. However, he ended as the leading wicket-taker of the series with five scalps at an economy rate of 5.10. In T20 cricket, the leg-spin bowler has churned out 226 wickets from 206 matches. The 31-year-old Chahal has been a genuine wicket-taker for whichever team he has played for thus far. 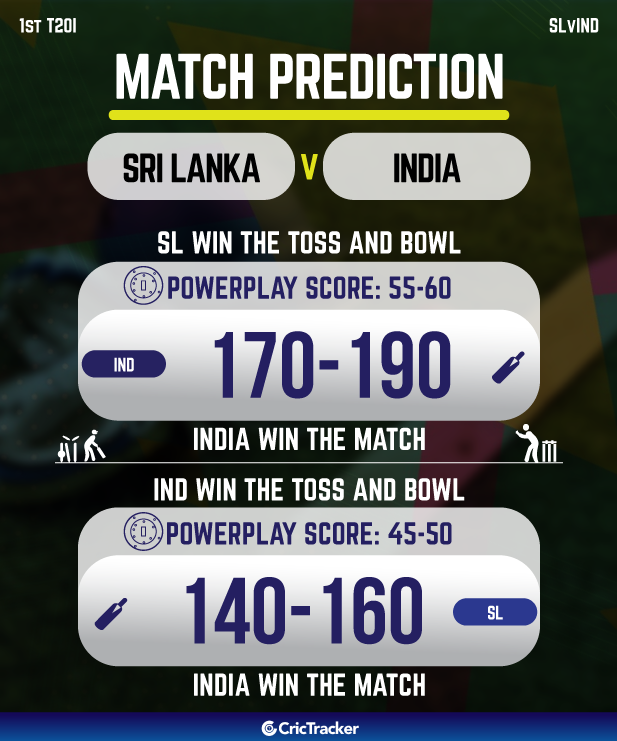