The first ODI on Sunday was a one-sided affair as India won with 80 balls to spare.

The first ODI between India and Sri Lanka turned out to be an overly one-sided affair. The Men in Blue came out firing on all cylinders and won the match by seven wickets with as many as 80 balls to spare. The young Prithvi Shaw became the Player of the Match after his flying start in India’s run-chase.

Though their batters put up a fight, the Lankan bowlers looked hapless, especially in the powerplay. The second game of the series is set to take place on Tuesday, July 20 and it’s a must-win affair for the hosts. The visitors, meanwhile, will be looking to put forth another clinical show and seal the fate of the series.

The pitch in the first ODI turned out to be an absolute belter, especially under the lights. Hence, it’s pretty much a no-brainer that teams should opt to field first after winning the toss. Yuzvendra Chahal and Kuldeep Yadav picked two wickets each in the first game, showing that the deck has something for the spinners as well. The conditions will mostly be sunny with no chance of rain.

Shikhar Dhawan led from the front in India’s first game against the Lankans. Not only did he shine as the skipper, but also did well as a batter. He scored an unbeaten 86 and guided India over the finishing line. Against Sri Lanka, the left-hander has scored 1069 runs from 17 matches at an average of 76.35. In Sunday’s match, he also went on to accomplish 6000 runs in ODI cricket.

Kuldeep Yadav has found it tough to hold on to his place in the national team. However, in the first ODI, he showed his class as a wrist spinner. He picked up the crucial wickets of Bhanuka Rajapaksha and Minod Bhanuka in the nine overs he bowled. Kuldeep bowled a maiden as well and had an economy rate of 5.30. He is again expected to deliver the goods next time around. 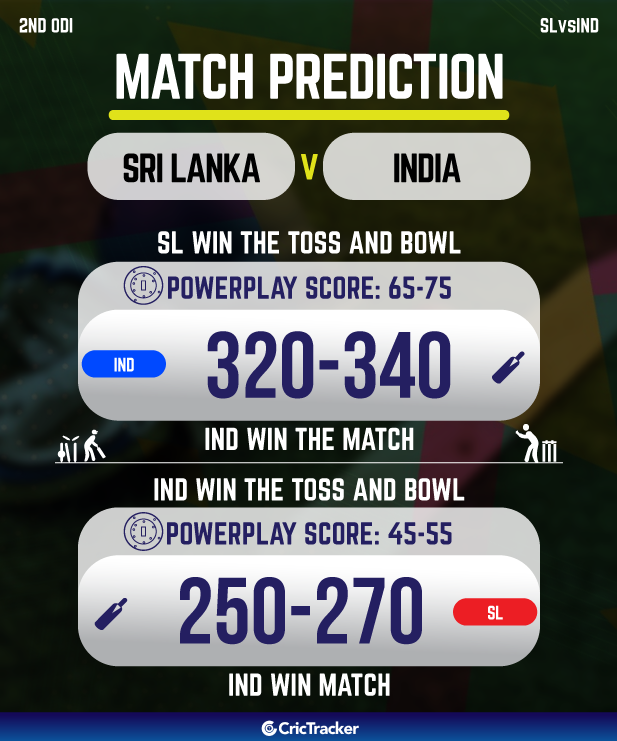