The pitch is expected to be low and slow, and batting may not be easy.

Sri Lanka and India are set to lock horns in the third and final game of the three-match T20I series on Friday, July 29 at the R Premadasa Stadium in Colombo. On Thursday, the Lankans made a stupendous comeback in the series after winning by four wickets with two balls left, having chased down 133.

The Indians played with only five batters in the second game due to COVID-19 hassles, but their bowlers gave the hosts a run for their money. The Islanders have strained to win this year, irrespective of the format, and with India not, having a full-strength squad, they have a good chance of winning.

The pitch in Colombo in the second T20I turned out to be a spin bowler’s paradise. Batting became tough as the game went forward. The track is unlikely to change in nature. But since 19 out of 37 completed T20Is at the venue have been won the team batting second, chasing can remain an option.

Shikhar Dhawan is currently the leading run-scorer of the three-match T20I series. After scoring 46 runs in the opening game, the left-hander scored a patient 42-ball 40 second time around. In the previous match, he had to curb his natural instincts since India lacked enough batters. The onus will again be on the Delhi-born veteran to deliver in the deciding encounter.

Bhuvneshwar Kumar is presently the top run-getter in the three-match T20I series. The fast bowler has picked up five wickets at an incredible economy rate of 5.73. In the first match, he picked up four wickets, leading India to victory and a 1-0. In the second match, he got the prized wicket of Avishka Fernando. The pacer needs to be on top of his game in the decider as well. 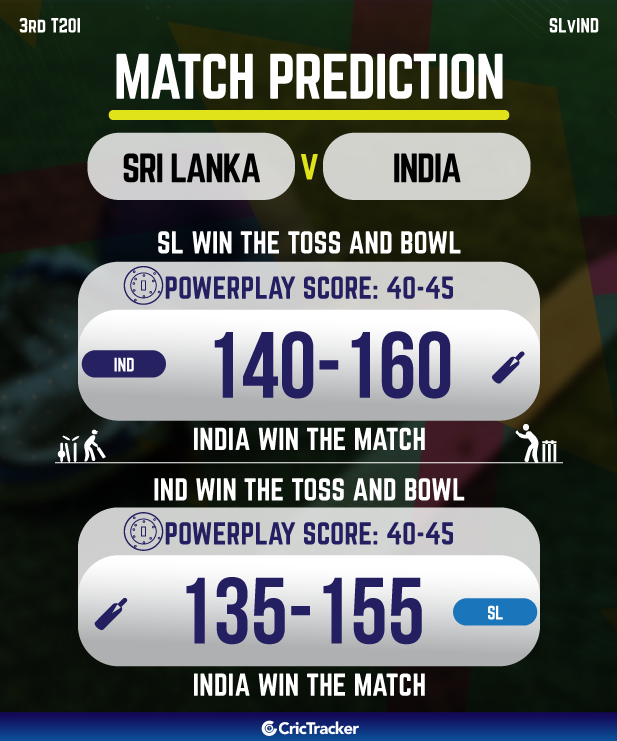