Out of 33 completed matches, 16 matches have been won by the team batting first.

After a dominating performance in the Test series, Sri Lanka couldn’t replicate their form in the five-match ODI series against South Africa. Albeit they won the last two matches, they eventually lost the series 2-3. Angelo Mathews and Co would now love to win the one-off T20I at the iconic R Premadasa Stadium in Colombo to be played tomorrow and end their campaign on a high.

In the meantime, the visitors won’t have Faf du Plessis as their captain and JP Duminy will have the responsibility. The team lost their erstwhile T20I series against India earlier this year, however, will start the encounter the favourites for the reason that they are ranked sixth compared to Lanka’s ninth. After defeats in the last two One Dayers, South Africa will want to bow out on a positive note.

The pitch at the venue has more or less been good for batting. The ball is expected to come on to the bat and the bowlers won’t have much room for errors by any means. However, the spinners may come into play bearing in mind the slow and low nature of the wickets in the subcontinent. Out of 33 completed matches, 16 matches have been won by the team batting first.

Kusal Mendis and Niroshan Dickwella are the openers and they are expected to complement each other well. Kusal Mendis and Dhananjaya de Silva will come at number three and four respectively. The onus will also be on Angelo Matthews and Thisara Perera to guide the team. In the bowling department, Lakshan Sandakan and Akila Dananjaya’s role will be important.

Hashim Amla and Quinton de Kock will be the openers followed by Reeza Hendricks, who made his international debut in the ODI series. JP Duminy, Heinrich Klaasen, and David Miller also need to step up. They are likely to play two spinners in the form of Tabraiz Shamsi and Keshav Maharaj. Ngidi and Rabada are the specialist fast-bowlers along with Andile Phehlukwayo’s gentle medium pacers.

The prediction is for South Africa to win the match by five wickets. 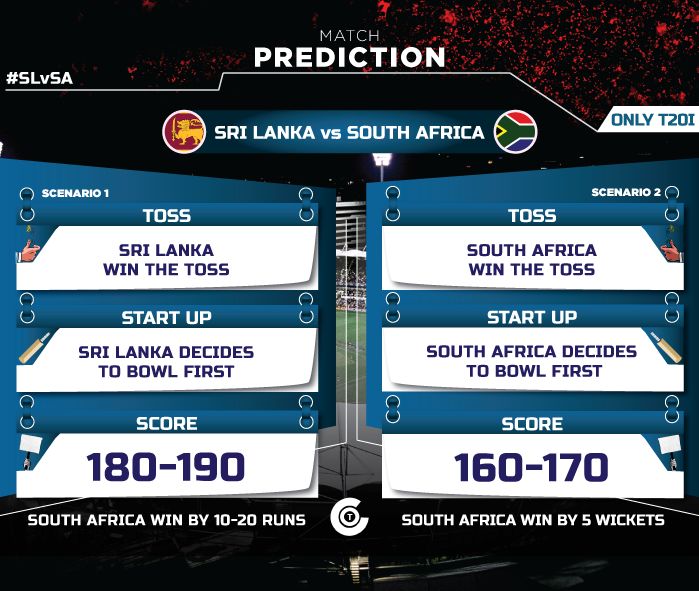