Stats: 7000 runs by Pakistan players in the ODI cricket

Stats: 7000 runs by Pakistan players in the ODI cricket

July has been a month of milestones for Shoaib Malik as he started the month by becoming the first Pakistan player to complete 2000 runs in the T20I format. He was the 3rd player after Brendon McCullum and Martin Guptill to complete the milestone and the Indian batsmen Virat Kohli and Rohit Sharma joining the list a couple of days later. Malik, during the final ODI of the ongoing 5-match ODI series against Zimbabwe, completed 7000 runs in the ODI format.

The all-rounder came into the series with 6975 runs to his name in this format. He was caught behind for 22 during the first ODI when he was three runs short of the 7000 runs milestone. Fakhar Zaman and Imam-ul-Haq’s dominating partnerships in the next three ODIs ensured Malik didn’t get a chance to bat. Finally, he walked out to bat in 38th over of the team’s innings in the final ODI after Imam-ul-Haq got out scoring 110.

Malik completed 7000 runs in this format with a single off Christopher Mpofu in the 39th over to become only the 8th Pakistan player to achieve this milestone. The No.4 batsman needed 237 innings to complete 7k runs, which is bettered by only four Pakistan batsmen. He needed 262 matches which are 3rd most taken by a Pakistan player after Shahid Afridi (341) and Saleem Malik (272).

More than half of Shoaib Malik’s career was spent batting at No.5 and lower where he scored 3950 runs across 157 innings at an average of 31.86 with only one century. While batting in top four, Malik has 3065 runs to his name in 81 innings which he scored at an average of 40.33. He scored eight centuries in this format while batting in top four and also scored 16 out of 41 fifties he scored in his ODI career.

Malik’s batting credentials have seen a substantial rise since his return to the Pakistan setup post the 2015 World Cup. He made a comeback during the home series against Zimbabwe in 2015 and has scored 1525 runs in the 45 innings he batted since then. Malik has a batting average of 47.65 in these three years scoring at a strike-rate of 98.13. 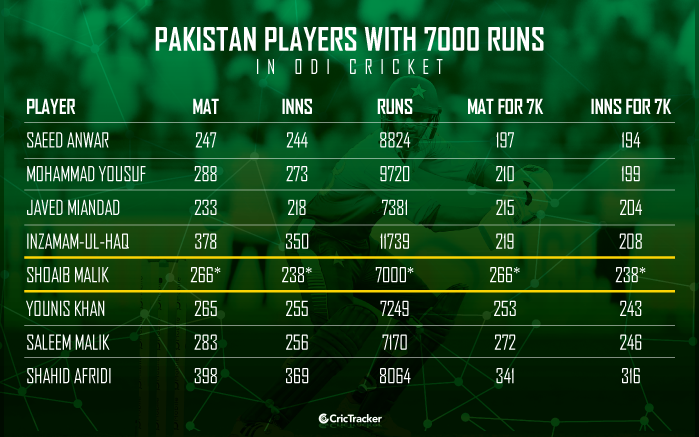