Fakhar and Imam pair became the first in Men’s ODI history with a 300-run opening stand during the 4th ODI.

Fakhar Zaman and Imam-ul-Haq made most out of the 5-match ODI series in Zimbabwe as the opening pair shared century partnerships in four matches in the series. With the 168-run opening stand in the final ODI, the left-handed pair became the first in the history of ODI cricket to add 600 runs in a single bilateral series. In fact, they ended up with 704 runs also becoming the first pair with 700+ runs as a pair in a bilateral ODI series.

The 704 by Fakhar and Imam are the 2nd most in any ODI series/tournament behind Tillakaratne Dilshan and Upul Tharanga pair who added exactly 800 runs in nine matches during the 2011 World Cup. Pakistan’s new opening pair also became only the 2nd pair with four century partnerships in an ODI series/tournament. The Pakistan pair of Imran Farhat and Yasir Hameed had four 100+ stands during the 2003 home series against New Zealand.

Farhat and Hameed shared 590 runs for opening wicket during that record-breaking 2003 series which were the previous most number of runs in a bilateral ODI series by a single pair. Earlier in the 4th ODI, Fakhar and Imam became the first in Men’s ODI history to share a triple century opening stand and also became the first Pakistan pair to share a triple ton partnership.

Most runs as a pair in a bilateral ODI series: 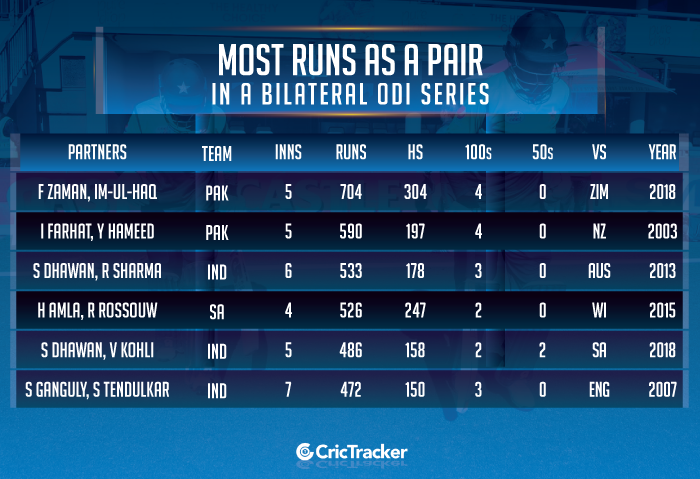 Among the top six pairs with most runs in a bilateral ODI series, Shikhar Dhawan and Virat Kohli are the only non-opening pair. The Indian pair batted together on five occasions for the 2nd wicket during the 6-match ODI series in South Africa earlier this year. The pair were involved in an ugly runout in the first ODI of the series but two century and two fifty partnerships in the next four innings saw them finishing the series with 486 runs all for the 2nd wicket.

Hashim Amla and Rilee Rossouw pair made 526 runs across four innings as a pair during the 2015 home ODI series against the Windies. The pair had a 247-run stand for the opening wicket and same stand for the 3rd wicket in that series. The Indian pair of Sachin Tendulkar and Sourav Ganguly added 472 runs in the 2007 series in England for the opening wicket. The pair shared three century partnerships but the hosts won the 7-match series 4-3.

Most runs by an opening pair in a bilateral ODI series: 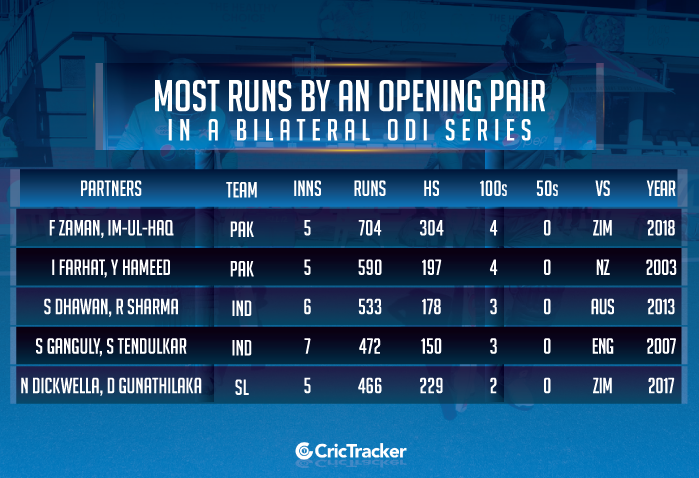