Afghanistan's 28-run win over Zimbabwe was their 50th victory in the T20I format.

It didn’t take a long time for Afghanistan to get back to success after a forgettable World Cup campaign where they lost all the nine matches they played. The change of captaincy seems to be working for them. The new captain Rashid Khan’s all-round performance inspired Afghans to a huge win in the one-off Test match against Bangladesh in Chattogram. They started off their campaign in the T20I Tri-Series with a 28-run win over Zimbabwe.

It was their 11th consecutive win in T20I cricket and thus equaled their own record for the longest winning streak by any team in Men’s T20I cricket. The Afghans won 11 successive T20I matches between 2016 and 2017 as well. The victory over Zimbabwe on Saturday was their 50th in the Twenty20 Internationals making them the 8th team with as many wins in this format. The Afghans got there in only 72 matches; by far the fewest any team needed for 50 T20I wins.

Pakistan were the first side to win 50 T20Is which they got in 84 matches. Later, their arch-rivals India also won their 50th T20I in the 84th match but South Africa need only 83 matches to complete 50 T20I wins. So far, England is the only team who needed more than 100 T20Is for winning their 50th match. The 2010 WT20 winners got there in 105 matches and won all the four they played since then.

Currently, Afghanistan’s win/loss ratio of 2.272 is the best among the teams with a minimum of 10 wins in Men’s T20I cricket. In fact, no other team even has a win/loss record over 2. Starting from their win against the West Indies in the 2016 WT20, the Afghans have won 22 out of 25 matches they played in the T20I format. The entry of Rashid Khan also played a key role in Afghanistan’s success over the last 4 years.

In 38 T20Is for Afghanistan, Rashid has taken 75 wickets at an average of 11.3 and a strike rate of 11.5. The Afghans ended up winning in 31 of those where the leg-spinner claimed 67 wickets at an average of 10.5 and needed 10.4 balls per wicket. Rashid, alongside Mohammad Nabi, have featured in 36 consecutive T20Is played by the Afghanistan team while the former skipper Asghar Afghan played in each of the last 49. 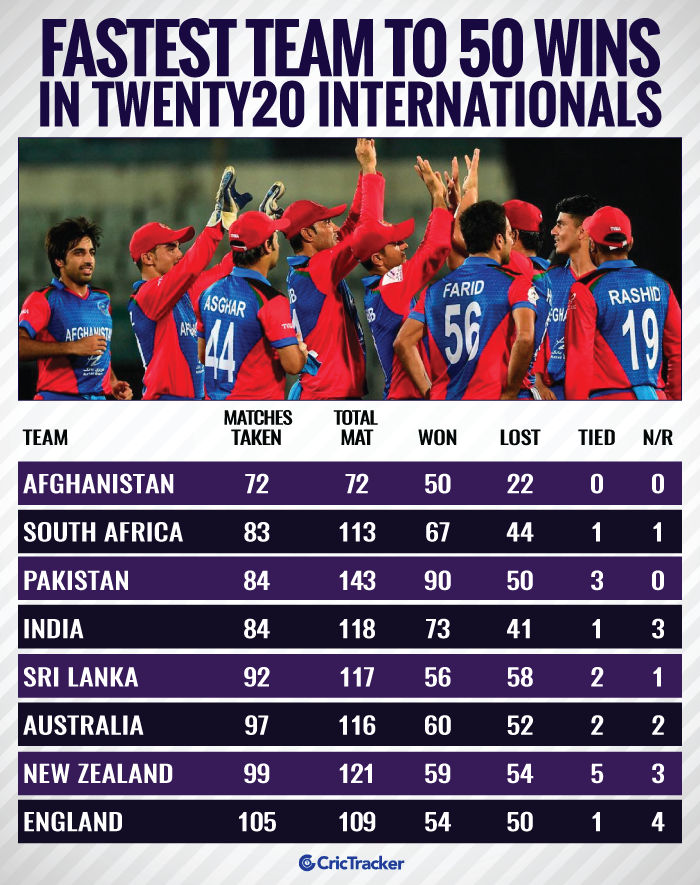