The ongoing fifth round of the Ranji Trophy 2018-19 season has witnessed a couple of major records being shattered. Naman Ojha became the wicketkeeper with most dismissals in Ranji Trophy while Paras Dogra hit his record 8th Ranji double ton on the opening day of their respective games. The game between Madhya Pradesh and Hyderabad in Indore witnessed another major event as the home team’s opener Ajay Rohera smashed a double century.

The 21-year-old was making his first-class debut in this game and produced an unbeaten 267 off 345 balls with 21 fours and five sixes. Rohera’s knock helped MP declare their innings on 562/4 and gain seven points with an innings win. Hyderabad were bowled out for only 124 in the first innings and 185 in the second. Pacer Avesh Khan bagged 12 wickets in the game including seven in the first essay.

With the 267-run knock, Rohera now holds the record for the highest individual score on first-class debut. He thus went past Amol Muzumdar who scored 260 on his FC debut for Bombay against Haryana in the 1993/94 season. Rohera was unbeaten on 255 at the end of the second day of the game. On the third day morning, the opener bagged the record adding 12 runs to his overnight total. Had MP not declared their innings, Rohera would have fancied himself to become the first player with a triple ton on FC debut.

A total of 18 players have now scored double centuries on the first-class debut and seven of those are from India. In 2017-18, Afghanistan’s Bahir Shah scored an unbeaten 256 and fell five runs short of Muzumdar’s record. Punjab keeper-batsman Abhishek Gupta also scored a double ton during the 2017-18 season. Among the previous 17 players, only Gundappa Vishwanath ended up scoring a double ton in Test cricket. In fact, only four of the previous 17 players have made their Test debut thus far. 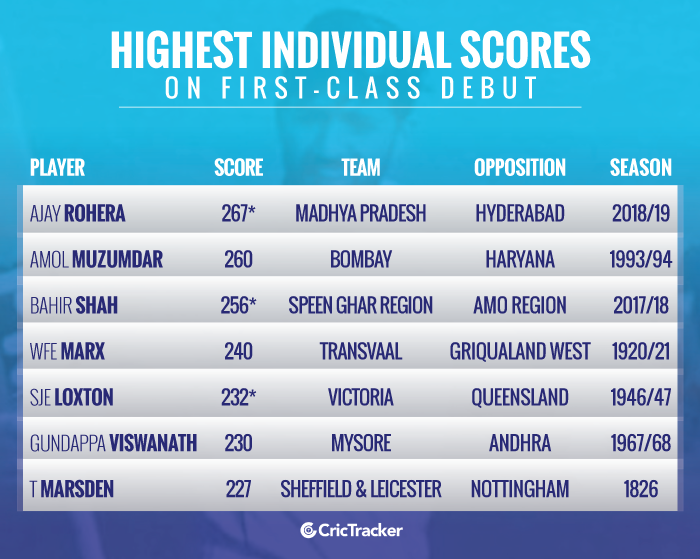