Stats: Andre Russell scored a century and bagged hat-trick in a CPL match

Stats: Andre Russell scored a century and bagged hat-trick in a CPL match

Andre Russell claimed a hat-trick with the ball in addition to his spectacular century.

Andre Russell’s first match as captain in his professional career turned out to be game to remember for him as the all-rounder single-handedly led his side Jamaica Tallawahs to a 4-wicket win against Trinbago Knight Riders in the Caribbean Premier League (CPL). Chasing a mammoth target of 224, the Tallawahs were five down for 41 in 6.1 overs. Russell miscued a slog sweep off Fawad Ahmed on the first ball he faced only to be dropped by the deep mid-wicket fielder.

He never looked back after this as he kept smashing the home team bowlers out of the park. The new skipper hit three boundaries and 12 maximums in 40 balls to complete his century. Thus, Russell recorded the fastest century in the CPL. He shared a 161-run stand for the 6th wicket in just 69 balls with Kennar Lewis who scored 35-ball 51. Russell remained unbeaten on 121 off 49 deliveries to take his team over the line with three balls to spare.

With his unbeaten 121-run knock, the all-rounder became the first player to score a century while batting at No.7 or lower in Twenty20 history. Mohammad Nabi’s 89 in the T20I game against Ireland in 2017 played at Greater Noida, was the previous highest T20 score at No.7 and lower. Russell’s 121* is also the highest T20 score batting at No.6 and lower surpassing Daniel Christian’s 113* at No.6 recorded in the ongoing season of the T20 Blast. 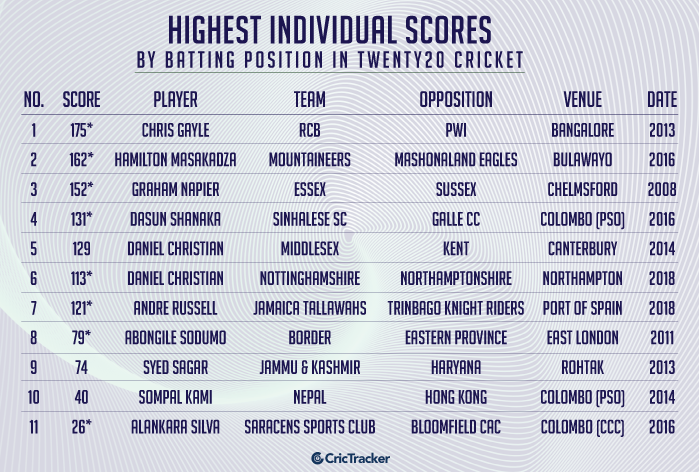 Denly and Russell are the only players to have scored a century and picked a hat-trick in a limited-overs game as no players achieved this double in List A cricket. The West Indies all-rounder is only the 8th player to score a century and take a three-wicket haul in the same T20 match. He is the first to do this double in the Caribbean Premier League.

Russell’s 121 is also the highest individual score among the list of eight players with 100+ runs and 3+ wickets in a T20 match. He claimed a hat-trick in addition to his spectacular century. He took the wickets of Brendon McCullum, Darren Bravo and Denesh Ramdin with three successive deliveries in the last over of TKR’s innings.

Thus, Russell became only the 2nd player in the history of Twenty20 format to score a century and take a hat-trick in the same match. Joe Denly achieved this feat during the T20 blast game for Kent against Surrey last month.

Century and three-wicket haul in the same Twenty20 match: 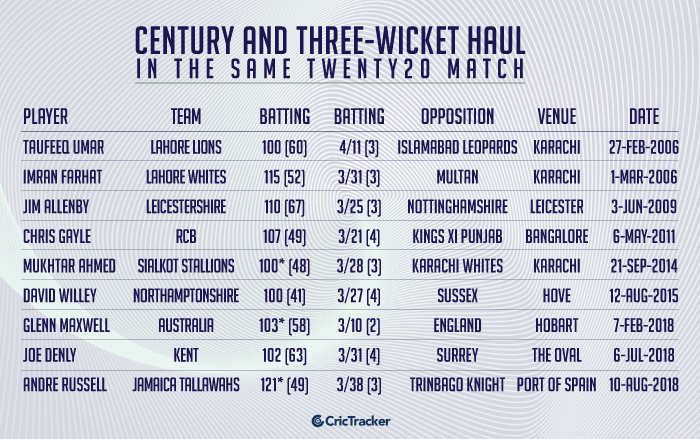