Among many top players, Sachin Tendulkar's name doesn't feature in the top 10 in this aspect.

One can keep MS Dhoni away from cricket but can’t keep the sport away from the veteran. The wicket-keeper-batsman made a strong comeback in the second ODI against Australia in Adelaide on Tuesday which India had to win to keep the series alive. He scored yet another fifty, his second successive, and it was of the qualitative significance when compared to the first. At the Adelaide Oval, Dhoni did not leave his team in uncertainty but remained unbeaten till the end to ensure that India levelled the series.

The unbeaten 55 off 54 deliveries brought the focus on Dhoni’s batting records and there was something Bradmanesque about it. It was learnt that the gloveman now has the best batting average in successful run-chases in ODI (in a minimum of 20 innings) and it is 99.85!

Even the great Virat Kohli, who is at the prime of his career at the moment, is ranked second best to the 37-year-old with an average of 99.04 in successful ODI run chases. Though the Indian captain has 4,853 runs in 77 innings in that aspect compared to MS Dhoni’s 2,696 in 72 and also does better in terms of strike rate (98.53 to 88.80), it is the average where the veteran is still the best.

No Sachin Tendulkar in top 10

Legendary batsman Sachin Tendulkar, who was one of the best in the history of one-day cricket and hit 16 out of his record 49 hundreds batting second, didn’t feature in the top 10. MS Dhoni will have more chances in the coming days to make his magical average touch 100. For one of the biggest finishers of the game, that will be a befitting farewell. 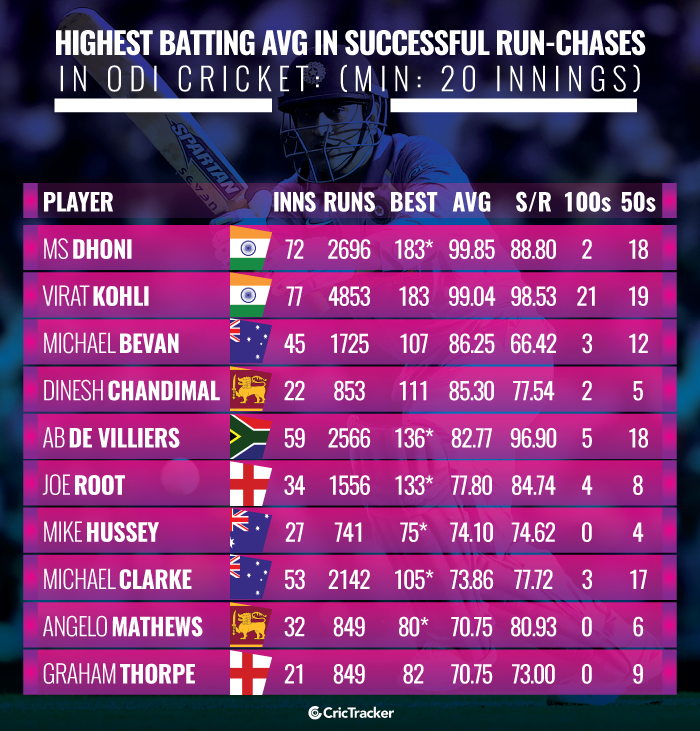