Kuldeep Yadav once again proved to be a tough customer for England as the Indian spinner ran through the hosts’ batsmen in the first game of the 3-match ODI series. After losing the toss, England began their innings by scoring 71 for no loss in the 10 overs. Just when another big total seemed to be on cards in Nottingham, Kuldeep’s magical spell saw England getting restricted to just 269 before getting bowled out in the final over.

Kuldeep broke the opening stand with his 2nd delivery by dismissing Jason Roy. His 2nd over put England into the shell as he trapped Joe Root and Jonny Bairstow in front in a space of three deliveries. England rebuilt the innings with a 93-run fifth wicket stand between Jos Buttler and Ben Stokes and were set towards a strong finish. Kuldeep once again turned out to be a partnership breaker dismissing Buttler.

He began his final over by dismissing another set batsman Stokes and finished his 10 overs adding David Willey’s wicket to his kitty. Thus, Kuldeep became the first chinaman spinner in ODI history to take a 6-wicket haul. He conceded only 25 runs in his 10 overs without yielding a boundary. His 6-wicket haul is the 9th recorded ODI haul for India with Ashish Nehra being the only player to do that twice. His figures of 6/25 are the 4th best bowling figures by an Indian in this format.

Kuldeep became the first chinaman to take a 5-wicket haul in T20I format when he took 5/24 in the Manchester T20I. He had a costly outing in Cardiff and he was dropped from the Bristol T20I before making a strong comeback. Kuldeep’s figures of 6/25 are the best by a left-arm spinner surpassing Murali Karthik’s 6/27 against Australia in 2007. His 6-wicket haul is also the first in ODI cricket for a spinner in England. 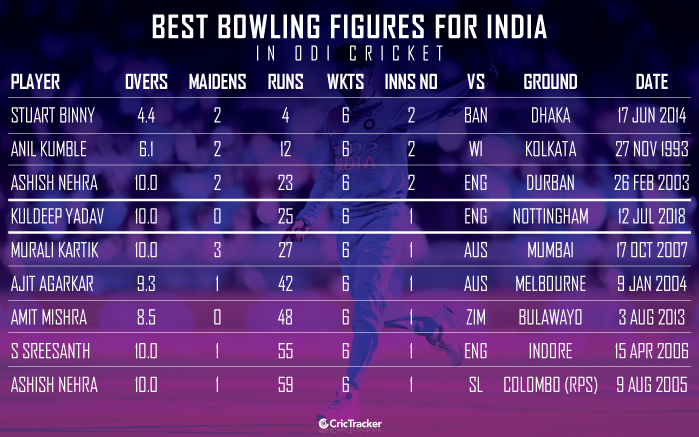