Only the teams participating in the 2019 World Cup are considered here.

The warm-up games are in progress at the moment even as the World Cup 2019 is coming ever so close. The event will get underway on May 30 in what is expected to be a high scoring tournament. The dynamics of the 50-over format have changed a lot since the 2015 World Cup which was held in Australia and New Zealand. England has been the most transformed side in the last four years as they revamped their whole approach towards the limited-overs format.

The England and Wales Cricket Board (ECB) took some harsh calls and included some attacking players in the line-up. They racked up runs at will and literally made the mockery of the 400-run mark which was once a dream for any team. Deservedly, the Eoin Morgan-led side also holds a record of the highest team total of 481 runs in the ODIs. They are also the only team to maintain a run-rate of above 6 since the World Cup edition of 2015.

England have managed to score 6.29 runs per over in 88 matches over the last four years and no wonder they are topping the list in this aspect.

India at the fourth position

Australia are the defending champions and they will definitely play as one in the upcoming World Cup. But the road hasn’t been easy for them at all. Having said that, the Men in Yellow are placed second in terms of run-rate in the last four years. They have scored 5.72 runs per over in 75 innings and 76 ODIs and they are followed closely by South Africa and India who are third and fourth respectively.

India played the second most ODIs since the 2015 World Cup and have scored at the run rate of 5.70. Their tendency to slow down a bit in the middle overs after a good start has hurt them on occasions. On the other hand, the Proteas have just pipped India by scoring at the rate of 5.71.

Afghanistan are last in this list scoring only 4.78 runs per over. Their bowling attack has been exceptional which has managed to restrict the oppositions to lower totals. Even when they bat first, Afghanistan manage to post totals around 250-260 and then back themselves to defend it. New Zealand are closely following India in this aspect scoring runs at the rate of 5.68. 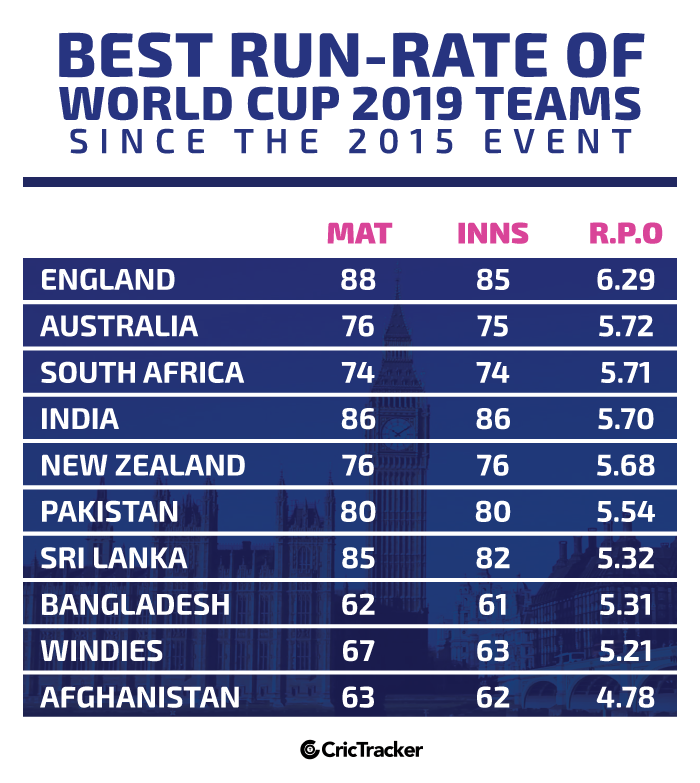