Stats: Biggest win in terms of balls to spare in ODI cricket

Stats: Biggest win in terms of balls to spare in ODI cricket

This was Pakistan's biggest victory in ODIs ever.

Pakistan thrashed Zimbabwe in the third One-Day International of the five-match series by 9 wickets to seal the series in Bulawayo. Faheem Ashraf was the hero for them with the ball as he registered his career-best figures of 5/22. His incisive bowling supported well by others helped Pakistan skittle the hosts for a meagre total of 67 after which their batsmen gunned down the total in less than 10 overs which is one of the biggest victories in the history of ODI cricket in terms of balls to spare.

Junaid Khan and Usman Khan were the tormentors of the top three batsmen as they began the capitulation for the Men in Red. Faheem then bowled one of the best spells of his career which never allowed Zimbabwe to make a comeback. In the chase, Fakhar Zaman continued his great run on the tour and won the game in the 10th over. They won the game with 241 balls to spare which is also the biggest for the Men in Green.

Who is at the top?

Pakistan’s win over Zimbabwe in the low-scoring encounter is the 10th biggest victory in the history of the ODI cricket while chasing. England hold the record in this aspect as they had won with 277 balls to spare against Canada in 1979 albeit in the 60-over ODI.

If only the 50 overs One-Day Internationals are considered, then Sri Lanka comes into the picture and Zimbabwe are once again at the receiving end. They were bundled out for 39 runs in Colombo in 2001 and then the hosts had chased down the target in 4.4 overs. Interestingly, Sri Lanka and New Zealand appear thrice in this list while Australia has twice registered two of the biggest wins in ODI history while gunning down the totals.

Zimbabwe is the only team to be on the losing side three times which clearly depicts their poor state in the limited-overs format.

Biggest wins in terms of balls to spare in ODIs: 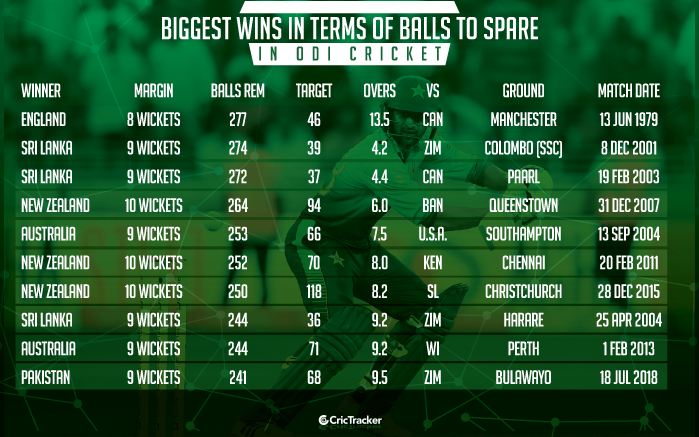