The big man has also smashed 930 boundaries in his T20 career.

When the Rangpur Riders faced the Khulna Titans in the 25th match of the BPL 2019, Chris Gayle added another feather to his glorious T20 career. The Windies cricketer scored 55 off 40 balls in the game which helped his team bag a six-wicket win. In this innings, the ‘Universe Boss’ smashed five sixes to create a unique record.

He became the first batsman ever in the history of the format to smash 900 sixes. He has played a total of 363 T20s in his career and had an opportunity to bat in 355 innings. Gayle scored 12,189 runs in the format out of which 5,400 were contributed just by the sixes which is quite marvellous. Another 3720 runs came in fours as he smashed 930 of them thus far. This essentially means that he scored nearly 75 per cent of his runs in just boundaries.

Miles ahead of others

The second-best after Gayle in terms of the sixes is Kieron Pollard. The all-rounder smashed 557 sixes in his T20 career and is still miles away from Gayle. There is quite some distance between the top five batsmen on this list.

Brendon McCullum, who played 365 T20s in his career his the ball out of the park 484 times. Shane Watson and Dwayne Smith are the next two batsmen to occupy the places in the top-five. While Watson hit 386 monstrous strikes, Smith got it right on 372 occasions.

David Warner is another Australian player on this list who cleared the fence 328 times. Rohit Sharma is the only Indian player to feature here as he smashed 322 sixes in his career. Aaron Finch is quite close with 320 sixes and it might not take him too long to go past Sharma and Warner as he is playing the BBL 2018-19 currently.

With 319 sixes each, Andre Russell and AB de Villiers follow the above players on the list. Both these players are playing the BPL 2019 currently.

Here is the list of batsmen with most sixes in T20 cricket: 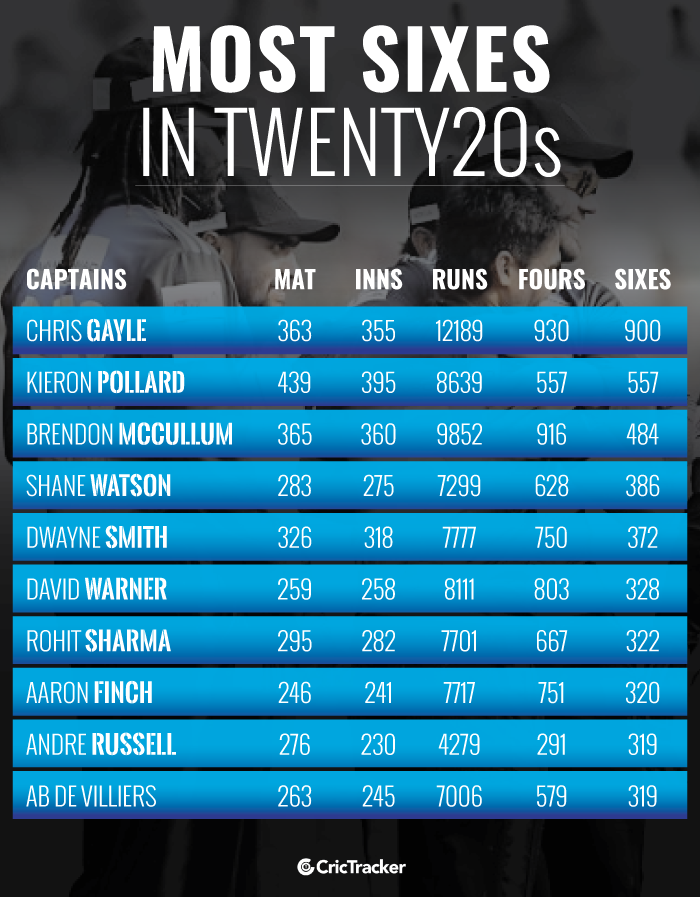