Stats: Chris Jordan bowls the joint most expensive 20th over in IPL history

Stats: Chris Jordan bowls the joint most expensive 20th over in IPL history

While Stoinis scripted the record of hitting third-fastest half-century for Delhi Capitals in the IPL, Jordan raked up an unwanted record under his belt.

Firstly, a miscommunication between Shaw and Dhawan resulted in the latter’s run out. To plunge more misery on the Delhi side, Mohammed Shami plucked the wickets of Shaw and Hetmyer to leave DC in doldrums. Capitals were 13/3 at one point but a 73-run partnership between skipper Iyer and Rishabh Pant steadied their ship.

But after the departure of both the young guns, it was Australia’s Marcus Stonis who provided fans with some enthralling fireworks in the end. The all-rounder smoked a 21-run 53 to steer DC past the 150-run mark. KXIP bowling force had no answers to Stoinis’ individual batting show. The Melbourne Stars’ player wrapped it up for DC by smoking 30 runs in the 20th over bowled by Chris Jordan.

Chris Joran was smoked by Marcus Stoinis in the ultimate over

In the process, Jordan registered an unwanted record to his name. He is now second in the list of bowlers who have conceded most runs in the 20th over. Rising Pune Supergiant’s Ashok Dinda is first in the list after being hit by Hardik Pandya for 30 runs in IPL 2017.

Stoinis was the destructor-in-chief in the last over. He started off with a six and the second delivery was a wide. He followed by three consecutive fours and a six in the next four balls bowled by Jordan. Stoinis’ half-century was completed on the penultimate ball but a bit of drama was yet to unfold.

Stoinis’ completed 1 run on the last ball but got run out while attempting to take the second run. But it eventually turned out to be a no-ball. Stoinis was run out but Nortje still was on the strike to face the extra ball. Nortje crunched it over the in-field and ran three runs with Kagiso Rabada.

While Stoinis scripted the record of hitting third-fastest half-century for Delhi Capitals in the IPL, Jordan raked up an unwanted record under his belt. The Barbadian-born English cricketer is now tied with Dinda for conceding most runs in the 20th over in IPL’s history.

Kolkata Knight Riders’ Shivam Mavi and Chennai Super Kings’ are next in the list after conceding 29 runs in the ultimate over. They had leaked runs against Delhi Daredevils and Mumbai Indians respectively. While Mavi was smoked for runs in 2018, Bravo was the victim in 2019.

The fifth player in the list is Rajasthan Royals’ Jaydev Unadkat. RR’s record-signing had conceded 28 runs in an encounter against CSK in IPL 2019. The MS Dhoni-Ravindra Jadeja duo had thrashed the Saurashtra pacer for 28 runs in the last over of the game. 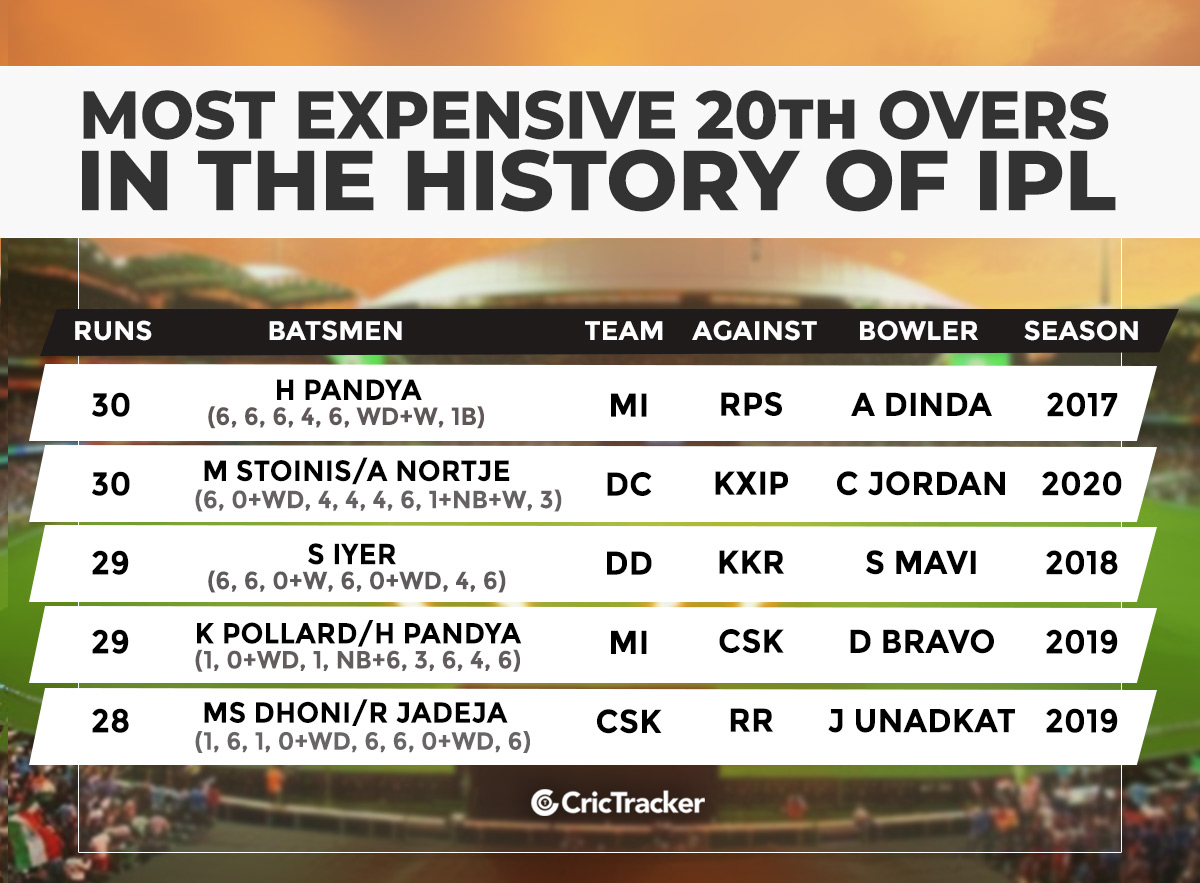